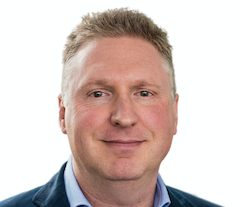 Tech Data’s MD for UK&I David Watts (pictured) has been promoted as SVP UK&I as part of a leadership reshuffle.

Watts’ new position was previously held by Andy Gass who will extend his role as operational leader of Tech Data’s UK&I business to focus fully on digital transformation in Europe.

Watts joined Tech Data, then operating as Computer 2000 in 1998 holding positions in sales and management before briefly leaving the company for a stint at Samsung Electronics. He returned to Tech Data as Commercial Director in 2007 and took the role of MD UK&I permanently in February 2018.

Patrick Zammit, President, Europe, Tech Data, said: “As MD UK&I David has built relationships inside our business and throughout the market to better serve the needs of vendors, partners and end customers, something that I know will continue following this promotion.”