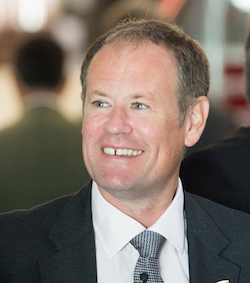 Former China White rock band member Jon Wrennall switched keyboards in the late 1980s when he embarked on a chart topping career in IT. Right now, the much celebrated CTO is currently 'on tour' spearheading Datchet-headquartered Advanced and the UK's bid to become lead players on the world's digital transformation stage.

Wrennall's career transformation from keyboard player in Blackpool-based band China White to become one of the UK's leading technologists and CTOs is as life changing as the digitalisation projects he went on to orchestrate. Wrennall's IT career began in 1989 when he joined BAE in flight simulation writing C programmes on Silicon Graphics machines and testing them in a Tornado cockpit on three big pneumatic rams. To say he earned his wings then and ever since would be to greatly understate the extent of his achievements during the following 30 years. For five years he was CTO of Fujitsu UK & Ireland, overseeing 1,200 architects while driving change across all areas of the business in a spell that saw the company transform its largely public sector client base to nearly 50 per cent private sector. By the time Wrennall sought fresh challenges the operation generated annual turnover of £1.7 billion.

Prior to Fujitsu Wrennall served as Her Majesty's Revenue and Customs' first CTO, leading the integration of the former Inland Revenue and Customs & Excise organisations. And later became Chief Information Officer, Transformation Director and Senior Information Risk Owner at the Valuation Office Agency. "At both organisations I drove savings of £600 million and led IT and business transformations that have helped shape how UK businesses interface with the public sector," said Wrennall. "This experience, and my passion for technology, enables me to enhance Advanced's products and make the complex simple."

Two months ago Wrennall was selected to join the CBI's Innovation Council to collaborate with fellow senior business figures to help steer the CBI's work on key policy campaigns, consultations and reports. "For business, innovation is the only long-term source of competitive advantage, and the Innovation Council aims to build an internationally competitive innovation ecosystem that reinforces Britain's strengths," stated Wrennall. "It gives us a platform to be the dominant voice on the role of technology in creating an internationally competitive economy for the UK. And we will lead the conversation when it comes to the ethical and moral impact of tech innovations, such as AI."

Wrennall noted that Advanced is investing in new technologies that it believes will transform productivity and accelerate innovation in every part of the organisation. Cloud platforms, micro services, and augmented intelligence - powered by Artificial Intelligence and Machine Learning - are central to his strategy.

In the first 12 months after Advanced's digital transformation the company achieved significant annualised savings and jumped from 135th position in the Sunday Times Top Track 250 to 97th place. The company generates almost £230 million turnover, has a headcount of 2,000 and serves 20,000 customers.

'The reality is that, unless businesses adapt and transform now, Britain will never again be head and shoulders above its global counterparts and be open for business'

"From a federation of acquired businesses, Advanced has undergone what is arguably the largest transformation of any UK company at this current time, going through a process of rebranding, restructuring and recruitment," stated Wrennall. "Technology helped the company to make productivity gains and increase visibility and transparency of information, supporting consistent decision making across all areas of the business including sales, marketing, HR and customer support."

Critical to Wrennall's strategy was moving from a disparate organisation run as 18 individual business units into a single, centrally managed organisation. "The dramatic changes in technology have meant that Advanced is now more agile, market-focused and aligned to the needs of customers," he stated. "Our focus on productivity and efficiency has created a powerful platform ready for future expansion."

Gordon Wilson took the helm as CEO in 2015, just prior to Wrennall joining the company, and Wilson's appointment proved to be a major turning point for the business. Wrennall added: "I was appointed to develop, drive and deliver our technology vision, from Research and Development, covering product management and development to make a real difference for business and society, and making the complex simple for our customers. Ultimately, I'm responsible for products across all our market sectors including education, health and care, legal, ERP, ticketing, public sector, not for profit and application modernisation, as well as the associated 700-plus people in my team."

In March this year Advanced acquired Science Warehouse, a British developer of cloud-based SaaS procurement solutions. Its technology drives efficiencies through the source-to-settle process for buyers and suppliers. This acquisition builds on Advanced's purchase of Hudman in July 2017, which works in the SaaS ERP sector. Hudman has since rebranded and relaunched as Advanced Business Cloud Essentials, targeting SMEs. Advanced also launched CloudDonor, a donor relationship management system for charities, and CloudMembership, a membership management system.

"We have made a number of changes to turbo charge our cloud credentials," stated Wrennall. "The cloud is increasingly seen as the fuel for digital transformation projects, which is why accelerating our cloud capabilities is a core element of our strategy. While it's not necessarily new, the cloud is not as widespread as people might think. Our research shows that only 33 per cent of organisations are experienced in the cloud. But the appetite for it is growing.

"This is one of the reasons why we launched our Advanced TruePartner programme, to help resellers change their traditional business models and embrace cloud technology as well as recognise what the cloud is - and what it isn't. Some vendors, for example, promote products as cloud-based when they are actually not true cloud solutions. There's a danger of creating confusion among organisations that rely on software resellers to guide and advise them."

Wrennall fears that SMEs, the backbone of British business, will be left behind because they lack the resources and budget that large enterprises enjoy. "We have therefore focused some of our products on the SME market," he added. "Our Advanced Business Cloud Essentials ERP solution, for example, is designed for SMEs. But, for all of our cloud products to succeed, we must foster strong channel partnerships and improve customer engagement through TruePartner."

'Boards and leaders need courage and vision to get to grips with this digital era, reimagining their future and creating new business models to retain a competitive edge'

Wrennall has ambitious plans in the SME market. His strategy reflects a bigger opportunity that he calls the Fourth Industrial Revolution. "We have a chance to leapfrog the UK into a leadership position," he enthused. "While some jobs will be lost, more new jobs will be created - as with every revolution. But we must be brutally honest: It's time for tough and bold decisions. Boards and leaders need courage and vision to get to grips with this digital era, reimagining their future and creating new business models to retain a competitive edge.

"Workers too must be bold and ensure they step out of their comfort zones to grasp new opportunities and invest time and energy in training for digital skills, such as via apprenticeship opportunities, as they also face transformational career journeys. The reality is that, unless businesses adapt and transform now, Britain will never again be head and shoulders above its global counterparts and be open for business."

To realise Britain's digital potential technology providers need credible people with real world customer side experience to help build trusted relationships, work through issues and create opportunities together, believes Wrennall. Many of these relationships will be forged with CIOs and CTOs which can be a challenge for resellers. Just as challenging are boardroom execs who underestimate the role of IT. "Technology powers every facet of our world and companies cease to function without it," commented Wrennall. "Purely treating technology as a cost massively risks missing the opportunities it can create.

"IT can no longer be 'left to IT'. It's increasingly important that everyone understands it well enough to make informed judgements. It's the role of IT leaders to ensure they are the subject matter experts to guide and lead coherent strategies. Without a coherent strategy, even informed executives can make a mess of well meaning uncoordinated decisions that made sense in isolation."

Wrennall's decision to join forces with Advanced in January 2016 was a no-brainer and made absolute sense on all levels. "I couldn't think of a better time to join Advanced," he said. "The business had undergone a period of growth and invested heavily in software development. We have an opportunity to explore and invest in technologies such as AI, Machine Learning, Natural Language Processing (NLP), Robotic Process Automation (RPA), the IoT and predictive analytics - and create an ecosystem of innovation. The challenge is prioritising where we invest and balancing today's needs with delivering our strategic roadmaps to get to these opportunities."

Just a minute with Jon Wrennall...

If you weren't in comms what would you be doing?
A farmer (most of the Wrennall family are in agriculture) or running an AV company

What do you fear the most?
Having any regrets

Your greatest strengths and what could you improve on?
I have a positive can-do attitude and belief that everyone can do almost anything if they put their mind to it. But I could work on 'think, pause, speak' as I tend to think aloud

What talent do you wish you had?
A better memory

Your biggest career achievements:
Monetarily, helping the British tax payer save £600 million at HMRC. From a people perspective, recreating the Fujitsu Distinguished Engineer scheme. And in business, helping make a good company great at Advanced

What is the biggest risk you have taken?
Leaving Accenture to be the first CTO for HMRC on day one of integrating Inland Revenue with Customs and Excise. It was a large complex organisation with different cultures