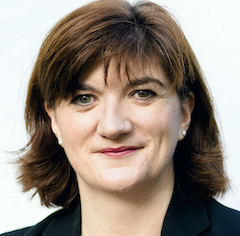 A ground breaking plan for the Big Four mobile operators to share phone masts to improve UK coverage is a world first, with many areas expected to be made 5G ready. The deal sees EE, O2, Three and Vodafone invest £530m in creating a new organisation to deliver the Shared Rural Network, a network of new and existing phone masts they would all share.

It follows Government proposals for an overhaul of planning rules and is part of the Prime Minister’s plan to level up the country with world class digital infrastructure.

The Government-owned mobile infrastructure built as part of the Emergency Services Network will also be made available to the four operators.

Digital Secretary Nicky Morgan (pictured) said the deal could be matched by £500m investment from Government if certain conditions are met.

Morgan said: "We are closing in on a deal so those living in rural areas will be able to get fast and reliable mobile coverage.

"Brokering an agreement for mast sharing between networks alongside new investment in mobile infrastructure will mean people get a good 4G signal no matter where they are or which provider they’re with.

"I want to see industry move quickly so we can reach a final agreement early next year."

Mark Evans, CEO of Telefonica UK (O2), added: These proposals represent a step-change in the way that mobile coverage is delivered."