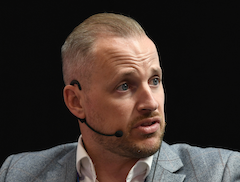 MyPhones Sales Director Paul Gibbs’ strategic language is as clear and concise as his objectives, and he leaves us in no doubt about the extent of his channel expansion ambitions.

Gibbs says MyPhones has come through phase one of its channel campaign with flying colours, now he is embarking on the second phase having joined the ten year old hosted comms provider in March as a visionary sales chief. On arriving from Gamma where Gibbs spent a year as Head of UCaaS and Mid-Market, he wasted no time in giving the megaphone to what he says is the channel’s ‘best kept secret in hosted telephony’. “With 72,500 live users on the platform MyPhones has grown quietly, steadily and without making a splash,” said Gibbs. “The timing is perfect to bring something refreshing to the channel and I plan to take it to a wider audience. I want us to move into the top five hosted providers in the UK, ideally the top three.”

Gibbs drew attention to a number of strategies but he believes his biggest opportunity right now is timing. “Many resellers are looking for their next partner, their next recurring revenue stream and ultimately a technology that will set them apart in a crowded market,” he stated. “In the current situation we have seen many resellers review their supply chain and consider new partners.

“We have already taken on a number of new partners due to this factor. Timing wise it is important for resellers to look for a product that can offer richer margins, nimble development and most importantly a long-term partnership.”

I want us to move into the top five hosted providers in the UK, ideally the top three

MyPhones was acquired by Livingbridge-backed Southern Communications in April 2018 and in its year ending March 2020 generated £2.3 million revenues, with group turnover at circa £86 million. “MyPhones is our own IP which puts us in a small group of providers that can steer their development with the future in mind and bring new features to life quicker than most,” added Gibbs.

“With the current coronavirus impact we are seeing end users scrabbling around and provisioning fragmented applications which may not be fit for business use. The big question is how secure is my data and is this a business built application. We see full MS Teams integration as the next piece of the puzzle providing the benefits of both platforms, both built solely for business under one subscription.”

Recurring revenues
The importance of recurring revenues is clearer now more than ever before, believes Gibbs, and resellers must ask what percentage of their business is built on recurring revenue. “If it’s less that 70 per cent it may be time to grow the recurring ratio,” he commented. “Resellers built on selling one off leasing deals will be struggling – that tap has been turned off. We are helping our resellers upskill to use our technologies as sales has changed for the foreseeable future. We are also driving platform enhancements which take us into new verticals. The channel may need to expand on its potential and change its way of engaging forever following the lockdown.”

Gibbs first unlocked his comms career potential in 1997 at Integra Networks, from where he moved to MTV Telecom for seven years, and then to Westcon. In 2010 he first joined Gamma as a BDM and became Head of Channel within three months. Then, after a brief spell in Scotland working for a reseller Gibbs arrived at TelcoSwitch and launched its reseller channel offering, later rejoining Gamma. “I love being in the channel and have developed some great relationships along the way,” stated Gibbs.

It was just two weeks after he joined MyPhones that the coronavirus pandemic took hold, but it did not stop the company from ramping up already strong efforts to deliver a product that Gibbs claims will put it in ‘a new bracket’. “MyPhones V3 includes a new portal that will be slicker and easier to use, a full rebrand of the business, new collateral and a fully interactive configurator which will make it easy for partners to understand their blended buy price and place orders,” commented Gibbs. “And we will have full Microsoft Teams integration. This will offer the full UCaaS suite of Microsoft underpinned by the PBX functionality of MyPhones.”

Just a minute with Paul Gibbs...

What talent do you wish you had?
To multitask

Tell us something about yourself we don’t know:
I am a film geek and tend to mentally retain the scripts

What do you fear most?
Multitasking

One example of something you’ve overcome:
I broke my leg and spent three weeks in intensive care. It gave me a new perspective on life

If you weren’t in ICT what would you be doing?
I would love to run a high-end tailors

What possession could you not live without?
My Peloton bike

The best piece of advice you have taken:
Play the long game and don’t be a quick buck merchant

Name three ideal dinner guests:
Muhammed Ali, an icon; Winston Churchill to hear his opinion on what is happening right now; and Alan Sugar, he must have some great stories

Your biggest career achievement:
The longevity of my relationships. I am proud to call a lot of them friends

Industry bugbear:
The ‘cowboys’: Those few taint the masses unfortunately

How would you like to be remembered?
As a good guy in the channel

Top tip for resellers:
Recurring revenue is king, and don’t burn your bridges