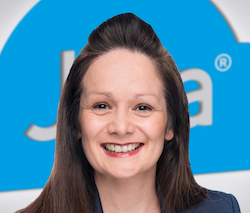 The focus on creating leadership opportunities for high potential women and accelerating their development is getting sharper, and Howlett’s objective is to raise awareness, inspire and demonstrate how small changes can make a big difference to the quality of female candidates being recruited and the success of organisations in the channel.

“I sat on the board at Jola for over eight years and was the only female board member,” she stated. “I like to think I brought a new dimension to the team and some complementary skills. Board discussions were always inclusive and a female marketing perspective from a detail-orientated person was often useful in decision making.”

The annual Female FTSE Board Report revealed UK FTSE 350 boards have made progress on gender diversity, but there are still few women in senior leadership positions. “I have worked in ICT and channel for most of my career and find it exciting and challenging, but the issue is that not enough female graduates view ICT as an attractive career for women,” said Howlett. “It will take time to see real change. We need to inspire young women to pursue careers in technology and support and mentor them into senior positions. We need to make sure we are flexible in our approach so we don’t lose people along the way. If we remove barriers there is nothing stopping us.”

Howlett believes that being a female on the board sends a positive message to other women in the organisation, that there is no glass ceiling and that it is possible to progress to more senior positions. “If you can see someone similar to yourself doing the job you want in the future, it makes the goal seem more achievable and you can often gain a mentor to help you learn the skills to be able to get there,” she added.

According to Deloitte, gender diversity in UK board rooms is lagging behind European counterparts with only one in five board room seats held by women. But the Jola board has learned that it’s not enough to have female representation, you have to make sure decisions are not made without everyone’s input. It follows that Jola is not specifically focused on hiring more women. It is against positive discrimination.

Inclusive approach
“Some people interpret ‘diversity strategy’ as a reason to recruit females to senior positions, not because they are the best candidate, but to hit a quota,” observed Howlett. “Our approach is to accommodate the best qualified, but the pool we recruit from needs to be more diverse. We need more experienced women with great track records in board positions who can add something extra.”

To this end Jola has put in place official training and development schemes as well as unofficial mentoring programmes. The company encourages networking and personal development sessions with organisations such as Reframe and Women in Tech. It has established work experience schemes, apprenticeships, sandwich year placements, graduate training, and advertises roles internally so women have an opportunity progress inter-departmentally. “We also encourage and pay for our staff to gain qualifications to progress within Jola,” added Howlett.

She champions a number of initiatives to remove the barriers some women face working in the channel, such as work-from-anywhere and part-time hours. “This has helped mums working from home, doing school drop-off and pick-ups, attending parent evenings, school productions, sports days and taking kids to after-school clubs,” she added. “It has also allowed mums to be at home to look after ill children and relatives, while being focused on the needs of Jola, our sales team and partners during working hours.”

As we can see, it’s also about being an attractive company to work for, so Jola has introduced EMI schemes and employee benefits that Howlett says competes with larger organisations offering flexible working and a gender diverse culture. “We changed the way we recruited to remove the barriers of specific qualifications and experience, and focused on finding smart people who share the same values as the Jola team,” added Howlett.

“There is no quick fix. We need to increase the number of experienced candidates to recruit from, and the more we can influence young people to reach their potential, the better the recruitment pool will be for us when they are ready to start work.”

It is noteworthy, pointed out Howlett, that when Jola was looking for a Non-Executive Director no female candidates were put forward for consideration. “If we want more women on boards we may need to grow our own and build connections to those likely to hire future board positions to make sure we are shortlisted for consideration,” commented Howlett. “With the right team around you, there is an opportunity to be heard and influence, even if you are the only female.”