Comms Vision 2018 Report: Olson-Chapman – 'We have to make the change now' 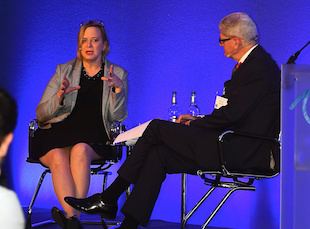 TalkTalk Business Managing Director Kristine Olson-Chapman injected a note of urgency in her Comms Vision interview as she rallied the channel around the Digital Britain flag with her key message: "The only way forward is full fibre and the race is on."

The oft-cited assertion that first movers gain a strategic market advantage has perhaps never rung so true as with the rise of full fibre infrastructure and the ultimate goal of building a future proofed Digital Britain.

"It's important to be first in the market with FTTP," stated Olson-Chapman. "For users, their experience of fibre is phenomenal. Once a customer has full fibre they are unlikely to move. The key is to be there first."

Rising demand for bandwidth and a creaking legacy infrastructure could have brought the UK to a near crisis point. But the Government and Ofcom have at last acted.

"In the past the Government sat on the fence and nobody knew how an infrastructure upgrade would be funded," noted Olson-Chapman. "Now the Government and Ofcom are clear and have made an explicit policy change in favour of competition.

Once a customer has full fibre they are unlikely to move. The key is to be there first

"There is a wealth of funding and great progress has been made but we have to keep the regulatory environment working for us. We need competition, we need Openreach to play a key role and we need to move faster."

The advance of Digital Britain will certainly weaken the prospects of channel businesses that fail to react appropriately to the demands of the market. But marching in step with the UK's digital quest will significantly strengthen the hands of proactive resellers tuned into a nation mesmerised by the benefits of ever greater bandwidth consumption and handy digital services.

"By most measures Britain is advanced digitally, in terms of shopping for example," added Olson-Chapman. "We also have thriving tech clusters that attract talent and investment to the country – all this despite our infrastructure - we have to make the change now."

Digital Britain is more than an infrastructure build. It has to be a scale play that gives access to all existing bases. And for Olson-Chapman common sense dictates that the best approach for TalkTalk Business and its partners is to adopt a strategy that covers all bases.

"Our first priority is the network," she said. "It's at the heart of our and our partners' business. We are future proofing the network, increasing capacity and changing the topology to handle higher bandwidth, while delivering greater resiliency, more protection, adding network choice for partners, developing our APIs and portals and getting the billing right.

"Multiple networks creates more complicated access methods and our role is to bring it all together, remove complexity and make it easy for partners."

Come Digital Britain, it is a near certainty that the channel will be showered by new possibilities for business growth, believes Olson-Chapman. "There is a huge opportunity for the channel to provide more products and services than ever before," she said. "Customers want to consolidate their providers and need partners with the ability to best serve their needs."

We need competition, we need Openreach to play a key role and we need to move faster

Full fibre is everything, but it remains to be seen whether the conditions for Digital Britain to flourish will be fully realised. "Full fibre has to be for everyone and we must ensure that nobody is left behind in a rural-urban divide," added Olson-Chapman. "There must also be equal emphasis on business as well as residential markets, and the UK's digital skills set needs addressing to help people embrace Digital Britain."

In the race to full fibre there is no denying that the gap between first movers and slow starters will widen. There is little choice but to act now, and Olson-Chapman is strongly in favour of a galvanised channel that recognises Digital Britain as a golden opportunity and a chance to push its own agenda, and argue for an open marketplace with no barriers.

"The regulatory environment is critical," she commented. "Is Ofcom doing the right thing? We have a good start but more has to come in terms of overcoming practical challenges like way leaves, road closures, access to ducts and poles etc. The upcoming consultations are important and the channel needs to speak out. It would be great to have a united channel front on these issues.

"We also need multiple networks and altnets have a vital role to play. This is our race to the stars. If you're in the race we all go further and faster with greater levels of competition."

The fog is at last starting to clear around the future look of Britain’s digital infrastructure, and what lies ahead is plain for all to see. "There is still much to do but the transition will be over in the blink of an eye," stated Olson-Chapman. "The channel must embrace the change and go forward, rather than bury its head in the sand."