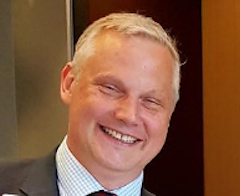 The impression given by Triton Telecom owner Dean Billington during his career has been constant – of a man guided by experience, focused on the customer, seeking growth and achieving success – and it all happened, literally, by accident.

Two motorbike accidents, the second rather more serious that the first, prompted Billington to get on his metaphorical bike and seek a career move that met with the aftermath requirements of his injuries. Thus he entered the comms sector following the shortest spell as a motorcycle courier. “I fell off my motorbike and broke my wrist on the first day,” said Billington. “I needed a job that allowed me to work with a broken wrist and BT was recruiting. I had previous experience of selling in a few roles and found that I was pretty good at it. I treated people as I’d wish to be treated, and only ever sold people things they needed.

“I’ve been accused of being too honest in the past, but I’ve always found that this is the best and only approach that works if you want longevity in a sector. Telecoms and I just fit together. No day is the same, and it’s never boring.”

A more serious motorcycle accident in October 2010 led to the setting up of Triton Telecom in 2011 with a business partner. “I was extremely fortunate to come back from that accident, and I needed a job that I could do around attending several medical appointments every week,” added Billington. “In establishing Triton Telecom our aim was to put into practice the things we’d learned after years of working for BT and we both wanted to put excellent customer service at the heart of the business.”

Triton Telecom experienced early success and within three months secured its first significant order, which was for a Government agency. This set the company on the right path financially. “I bought my business partner out of the business in October last year and we moved to new premises in a much better location in February this year, directly before the pandemic hit,” added Billington. “We still haven’t been able to operate from the office or organise it properly.

“This year we also invested in a new billing platform, a new website and a new CRM system. And we changed priorities on product sets given the impending changes in the network. Within three to five years I aim to have Triton employing twice the amount of staff, including IT support, which will involve persistence in the face of adversity, optimism in the face of negativity, and a shedload of hard work.”

Billington expects a shrinkage of turnover and profit this year, but with a ‘huge’ bounce back next year. “Unlike other comms companies that focused just on one sector, our customer base is varied so the pandemic impact on us has been somewhat mitigated,” he commented. “Two new members of staff started in August and I aim to recruit new sales people later on in the year.”

Triton Telecom presents itself as a one-stop-shop for all B2B telephony requirements. It has a range of key partners in technology, IT, marketing, telemarketing and SEO. “Social media and online marketing are key,” noted Billington. “With businesses closing offices in favour of home workers, it’s going to be one of the main ways of getting messages across. We are a fantastic company to work with, but getting this message out has always been a challenge. We are probably one of the best kept secrets in comms, so we are putting a lot of investment into digital and social media marketing.”

Such activities will build on networking opportunities that are already well advanced, especially through BNI (Business Network International) which Billington has been a member of for four years. “The organisation has a plethora of business professionals to support and influence positive change in any business,” he explained.

“This support can come from a marketing manager at a firm of solicitors, the owner of a social media company or even an author who writes books on how to use LinkedIn, for example. It’s about referral-based marketing, and it’s been invaluable to my business.”

Another way forward lies in maximising every opportunity and making exceptional customer service the beating heart of the business, believes Billington. “Stop selling on price, sell on benefit to the customer,” he emphasised. “It’s a race to the bottom on prices at the moment, and it’s unsustainable. Countless businesses in our sector would have gone under, or are going under, because they just don’t have the financial resilience to withstand any form of hit, never mind a global pandemic that shuts all organisations down.”

Against this backdrop the market potential of hosted VoIP is more significant, but only as part of a broader Unified Communications platform, according to Billington. “PBX-based infrastructure is quickly disappearing and with the ceasing of the traditional networks, announced by Openreach and due to start in 2025, VoIP and SIP will be the main target market,” he added. “There always has been a crossover with IT and telephony, and it is common sense to broaden our IT abilities and products.”

Just a minute with Dean Billington...

Role model:
Caroline Waters OBE, the Deputy Chair of the Equalities and Human Rights Commission, and on the board of many other organisations like Project Fortis. I count myself very blessed to call her a friend.
What talent do you wish you had? To be in two places at the same time.

Your biggest opportunity:
Getting up in the morning! Every day is an opportunity to do better than you did the day before. Every day is a new start. You only have so many days, so make the most of them and enjoy it!

Tell us something about yourself we don’t know:
I am a qualified PADI rescue diver.

Your greatest strength, and what could you work on?
Fortitude and willpower are strengths. But being strong willed can come across as a little too direct or tactless. I need to keep working on the balance.

The biggest risk you have taken:
Buying my business partner out. I did this because I truly believe in my staff and my business.

Who do you admire most in comms?
Peter Jones.

Biggest career achievement:
My business network. The people I have had the good fortune to meet and build a relationship with are very important to me.

Name three ideal dinner guests:
My Grandmother, for her advice and to ask her what she thinks of the choices I’ve made; David Attenborough, he has so many pertinent stories; and Peter Jones, he has a wealth of experience in telecoms and I’d like to ask him for some pointers.

Top tip for resellers:
If you can do a good job and you enjoy it, then carry on. If not, do something else.