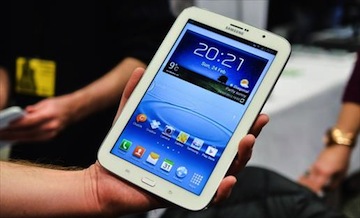 Falling prices and consumers' insatiable desire for multimedia content mean that the phablet phenomenon will continue into 2015 and beyond.

According to market watchers Gfk, Smartphones with a screen 5.5 inches and larger, often called Phablets have been outperforming the mobile device market since the launch of the Galaxy Note in 2012 with Asian markets leading the way.

Phablet ownership is growing in all regions with the last quarter of 2014 setting a new record of 12.8 percent of total global mobile device sales.

Asia Pacific has led the adoption of the phablet and in Q4 2014 they represented 17.5 percent of all mobile devices sold in the region, up from 8.5 percent 12 months earlier.

The market share of phablets grows at the expense of that of standard sized smartphones. Globally their sales unit shares fell 13 percentage points from 100 percent in Q4 2011 to 87.2 percent in Q4 2014.

Arndt Polifke, Global Director of Telecoms at GfK, says: "The phablet's not-so- secret weapon is its screen size, perfect for consuming the media content people have become addicted to. Phablets are all-rounders, fulfilling the combined roles of a smartphone and tablet - but for a lower price than just one of these devices. This means emerging markets will have a crucial role to play in their rise, and we expect to see sales increase in Africa and Latin America in 2015 and beyond."

The increase in phablet sales volume was accompanied by a fall in average price - perfect conditions for sales to take off. Comparing prices in Q4 2014, Europe had the highest prices with an ASP of $761, followed by Latin America at $631, Africa at $625, the Middle East at $511 and APAC at $466.

Arndt Polifke continues: "Consumers are starting to choose phablets instead of normal smartphones. We expect to see this trend continue in 2015 for two reasons: firstly, the appeal of a hybrid phone/tablet is particularly strong in emerging markets where consumers can now make a choice between a basic smartphone and one with tablet capabilities for almost the same price. Secondly, more affordable models are coming to market, with a number of models now available for $150 or less, making them accessible to many more people. For the tech-obsessed consumer, more sophisticated models are available for $800 plus. With their multiple uses and price points from low to high, the phablet is poised for greatness in 2015."