Home » News » FCS conference calls for collaboration on switch off

FCS conference calls for collaboration on switch off 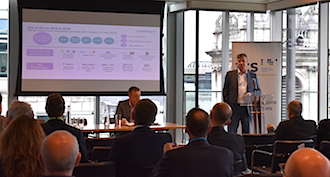 The Federation of Communications Services’ Comms Provider 18 event staged in London last month gave reseller members the chance to get an understanding of how the major protagonists are managing the seismic telecoms infrastructure changes ahead.

The event was predicated on the Government’s Future Telecoms Infrastructure Review which has laid out plans for a full fibre broadband network across the UK by 2033 and 5G to the majority of the country by 2027. Funded by a £1.1 billion digital connectivity package and the £400 million Digital Infrastructure Fund, the network is being built by Openreach and altnets such as CityFibre, TalkTalk, Gigaclear and Virgin Media. These organisations are tasked with ultimately sending copper lines to the recycling centres and giving businesses and homes the reliability and performance of fibre to power applications and solutions only dreamed of in the past.

Furthermore, the Government has committed to support private mobile providers with a £200 million testbed fund, as well as additional spectrum, to promote new 5G services to meet the bandwidth demands for big data, IoT, wireless automation and to fill the rural coverage hole. A target has also been set to connect 15 million premises by 2025 and become a world leader in 5G by 2027 (just four per cent of the UK population are currently full fibre subscribers, compared to 95 per cent in Portugal). These are ambitious targets and to meet them industry collaboration will be crucial and comms providers must ‘evolve or die’ said Raj Kalia CEO of the Government’s BDUK project team.

“Our vision is to deliver the world’s best digital economy,” he said. “This is a pivotal moment in the history of telecoms. You must ask yourself: What does this mean to my business? How do I evolve and help my customers evolve? The PSTN will switch off in 2025, so what does that mean? How will you stay relevant? How will we switch from one network to another? Switchover, switching and switch off need to be thought through and discussed. This is not the Government’s role. We will have an oversight but that’s all – industry has to lead the process.”

Mark Logan (pictured), Product Director at Openreach, was equally dogmatic and brutally honest about the task his company has and the challenges comms providers will face in the years ahead. “ISDN, ISDN 2 and ISDN 30 are going,” he stated. “Openreach is out of the voice business. Somebody else needs to provide the services now. To hit the targets, we must move 44,000 lines a week assuming we start now. That’s a monster of a challenge. We cannot do it ourselves – it has to be a collective.”

Openreach is out of the voice business. Somebody else needs to provide the services

Logan also pointed out that the switchover will not be passive and there will have to be a forced migration towards the end of the process that will dramatically affect 16 million homes and businesses. “In the new world – when we make the switch – everything will flow through the data hub,” commented Logan. “You will need new phones and extensions and faxes and door entry systems will not work. We need to cover emergency back-up. It will not be a simple thing for a massive number of homes and businesses.”

Logan did stress however that copper estates will be retained for some time providing transitional alternatives such as G-fast, VDSL or SOTAP (Single Order Transitional Access Product) to homes and premises that do not have FTTP after the switchover.

Mark Collins, Director of Strategy & Public Affairs at CityFibre, which is unrestricted by regulation, was upbeat about his company’s progress in bringing fill fibre to 100 cities nationwide and said the integration of service provider Entanet into the business was helping customer migration. “It is our vision to modernise this country and spark innovation in a digital age,” he stated. “We are building fibre alongside existing copper networks in partnership with local authorities and service providers. Bringing the latter onto the network is critical and with Entanet we have the service provider relationships behind us.”

Justin Leese, Programme Director, Full Fibre Networks at BDUK, urged CP delegates to take advantage of the Government’s Gigabit voucher scheme and said the door was open for them to set up their own local fibre networks. “We want to stimulate interest in fibre,” he said. “DCMS is funding fibre into 100 schools across the UK and our ultimate target is 1,000. This means CPs can then come in and sell it to homes and business nearby. As an example, Wessex Internet have done this successfully in Chichester.”

Leese also encouraged delegates who have identified local project opportunities to investigate the Government’s Wave 2 Challenge Fund, which offers funding to companies that can demonstrate how they are creating tangible benefits for the UK in productivity and economic growth.

Tim Cross, Principal at Ofcom’s Competition group, confirmed the regulator was targeting unconstrained access to Openreach’s poles and ducts for CPs from Autumn 2019, effectively halving the cost of laying fibre and said the prospects for network competition would vary across the UK due to population density and build costs. Delegate questions posed during and after the debate were mainly focused on any hindering of number porting, which is regulated by Ofcom and enshrined in the regulator’s General Conditions of Entitlement.

Bob Irwin, Sales Director at Triangle Networks, said: “We have some seismic changes happening within the industry. Number porting is a nightmare as it is, but when they step up from their current volumes, it will descend in to chaos. I would like to know what plans are in place to deal with this at the very least by 2020.”

Concluding the conference, a sobering view was provided by Professor William Webb, President, Institution of Engineering and Technology, who firmly believes the drive for ‘blindingly fast’ 5G and full fibre is a religion not everyone buys into. Quoting global consultancy BCG, he said: “Telcos have overrated the role that speed plays in customer satisfaction. For video, we saw that once speeds reach 1.5 Mbps, further increases have little or no impact on users’ perception of performance. The growth in demand is slowing and the requirements of richer content are balanced by improvements in compression and optimisation technology. G.Fast is fast enough for at least a decade, perhaps more.”

Webb is also convinced people are generally not prepared to pay for superfast service and economic benefits are minimal. “Speeds are already sufficient for many,” he added. “There are no expectations that ARPUs will rise for 5G and, where home broadband alternatives are offered, the majority opt for lower data rate packages. South Korea has not obviously benefitted from early full-fibre and like the UK, with little FTTH, have not obviously seen lower growth as a result. When a gigabit service was rolled out in Australia, just 63 people signed up.”

Itret Latif, Interim CEO of FCS, commented on the issues at hand: “As we move to the digital world FCS wants and requires open next generation networks whether fibre or 5G with non-discriminatory and equal access for all so that innovative services and competition can continue to thrive.”

Ultimately, the march to a fully Digital Britain is gathering pace and the heavyweight line up of speakers at CP18 provided more questions than answers to the impact it will have and, underlined the need for a coordinated, consolidated plan from all the players involved. Who will take the lead in this is anyone’s guess.