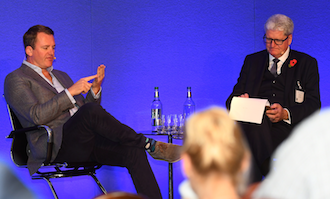 The thrust of 9 Group CEO James Palmer's Comms Vision interview was reflective of the changes in technology and the industry he knows so well.

For him, the forthcoming months and years have a coherent trajectory which is a million miles from the company's first iteration as a minutes business, with later advances made in hosted comms and data.

Just as resellers need to engineer a new relationship with customers to succeed in Digital Britain, Palmer must take the lead and judge the shifting market dynamics, a task made easier by his self-imposed detachment from the day-to-day running of the business.

With space to think more clearly and long-term, now is the moment for consideration and the overwhelming weight of his strategy lies in the provision of a complete applications suite.

Above all, his priority is to devise and impart the longer-term strategy and gain broad acceptance from the Group's employees.

"Make sure staff buy into your vision," he stated. "You must priorities full engagement with colleagues rather than take a scattergun approach."

In charting his journey Palmer noted the long history of hosted, it's nothing new, and expressed a belief that the CPE market is far from dead. The big issue occupying his mind right now is where future revenues will be derived.

"Voice is a shrinking part of the customer's wallet share," he said. "Voice is less critical because more messaging platforms are being deployed. So we will look at all forms of communication and help people to work smarter."

Palmer displays a back story characterised by an instinct to move with the times while always evolving his business, also through acquisition, to offer something more interesting to partners.

His approach includes a link up with Mitel for a hosted offering, and a connectivity play with the launch of a data network, enabling 9 Group to act as a one-stop-shop for partners.

Now Palmer is redefining 9 Group as an applications business. "This has to be the direction of travel," he added.

In all of this Palmer reflected on the real changes that are happening in the market. "By opening up access to data the security aspect becomes a massive play," he noted.

"We have made acquisitions in the data space and are thinking about how to engage with customers and take them on the journey away from voice.

"Partners have the trusted relationship with customers, so why not introduce wireless products, which leads to a conversation about security, routers and firewalls. Once you're into security, consider device management. There is a massive opportunity in providing a full suite of applications."

9 Group is targeting £100 million turnover and has circa 200 staff. The company has travelled far from the days when Palmer set it up on his own and continued to perform many vital tasks single handedly.

"You end up liking your way of doing things," he added. "I became something of a control freak but had to accept that I can't micro manage any more. I detached myself from the business for five weeks and empowered my teams. Staff churn is virtually non-existent.

"Now I'm hands-off and visit the office once a week. I work more on strategy and the future direction of the business.

"Empower your teams to deliver. Being hands-off and developing a culture with regular cross company communications makes a big difference."