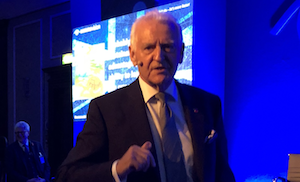 Mountain people will be the forgers of Digital Britain, but valley people will have no say or influence, argued legendary athletics coach Frank Dick OBE in his inspirational Comms Vision keynote.

In their capacity to take risks and grasp opportunities to change the comms landscape mountain people are to be celebrated, and are massively advantageous to the emergence of Digital Britain, he suggested.

"Valley people start sentences with 'would have, could have and should have'," stated Dick. "They have an excuse for why they believe they are not in control of their life. But mountain people decide to take the risk of winning.

"They see change as an opportunity. As in a game of rugby the ball is the opportunity. You have to have the ball, seek it out and fight for it, if have have it, use it, if a colleague has it you support them. If the opposition wins you learn from that experience to use the ball more effectively in the future.

"Mountain people are proud of the shirt they wear which says 'If you're not living on the edge you're taking up too much room'."

The go-get attitude of mountain people is a precondition for the success of Digital Britain, and the journey towards the end game will precipitate a widening gap between mountain and valley people, winners and losers.

"You're not born a valley or mountain person - it's your choice," emphasised Dick. "And you can always change your attitude. You are in control of your own performance and the performance of your team. That, from my point of view, is the focus of everything in life."

Another essential point is that Digital Britain won't happen if we limit our horizons, noted Dick. "What does Digital Britain look like?" he asked. "If you don't know where you're going, how can you plan the journey?

"You've got focus on dreams and milestones at the same time. Your dream is the long-term strategy and what you imagine, the milestones are the moments on the journey.

"We need to get into a world where there are no excuses and no limits to our mentality. So get the notion of disruption into your and your staffs' heads.

"Disrupt your thinking on how you do things, scatter everything, then create a dream, make decisions about your dream, and from there create a design of what you want to do next – and delivery will fly out of the other end."

That's not all: Only by collaborating with others will Digital Britain open up a real opportunity to the channel, believes Dick.

"If we're serious about Digital Britain and our target to become the greatest digital nation in the world, we have to work together," he stated.

"It's pointless to be competing all the time and not learn from each other. Coopetition means we learn more and operate at a higher level."

Such an approach would initiate a new era of industry partnerships that would symbolise and underline the demise of old business models, and precipitate a release from the shackles of legacy infrastructure.