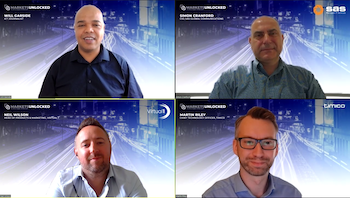 Software Defined Wide Area Networking (SD-WAN) is tipped as one of the fastest growing comms markets, but it’s also perhaps one of the least understood...

Enter the panelists at last month’s Markets Unlocked educational video event hosted by Comms Dealer in association with Virtual1, which sought to unravel the channel opportunity.

With a value expected to top $5 billion by 2023 according to IDC, the managed SD-WAN area is experiencing a staggering 59 per cent CAGR and likely to accelerate as organisations seek ways to accommodate more remote workers. Although SD-WAN technology has previously been regarded as only useful to larger organisations with lots of branch sites, SD-WAN is heading rapidly into the mid-market driven by several factors. “In the early days of SD-WAN it was all around cost reduction in terms of reducing the circuit type,” stated Simon Cranford, CIO at SAS Global Communications.

“Whereas the real benefit that’s emerged as products matured is that, in the UK at least, the argument over the cost of comms is not true – it’s actually coming from capabilities such as central orchestration, the way that you can basically deploy policies, make changes, control, adapt multiple services all into one solution, which is really the key driver and benefit in helping organisations to simplify their estate.”

The panelists agreed that the focus on replacing costlier MPLS circuits with broadband was only part of SD-WAN’s appeal. Instead, digital transformation and the cloud is proving a greater driver for change. “If I think of ourselves – we’re using Office 365, that’s in one cloud location,” said Neil Wilson, Head of Products and Marketing at Virtual1. “We’re using Salesforce, that’s another cloud location. We’ve got aspects of our network throughout other locations. So our single office is actually now multiple distributed offices with different workloads and data stores within a multiple point network with critical traffic running between lots of different locations. The need to control all this complexity has now hit the mid-market because of the way that all businesses are changing.”

Even as the UK ramps up its fibre roll out and with 5G on the horizon, application accessibility is still key. “You have a lot of customers that are geographically diverse, we have a number of them ourselves, and no two sites are the same,” explained Martin Riley, CTO at Timico. “You come across challenges where you can get Ethernet in one site but not in others, you get 4G in one area, but not another, but customers always want to be able to access their applications.

“If you think of a retail customer, if they can’t take a payment they are critically stopped in terms of being able to function as a business. So being able to gain central control and have three, four or five different policies or designs that you can just push out on a whim without having to send a technical engineer to site is a major benefit.”

The panel agreed that SD-WAN is still a harder sell than traditional comms but potentially more valuable. Getting in the door early is the key according to Riley, “Start with a list of four things that SD-WAN can offer, and have an IT business related conversation with the customer rather than a network conversation,” he said. “Understand what they are looking to achieve in the immediate term but also over the next few years because many have larger business transformation projects that you have to be able to support.”

Channel revenues come from multiple avenues, noted Cranford. “We’ve talked about how it’s an upsell layer – you’ve got additional clients with licenses that makes the customer sticky,” he said. “Although it’s very much promoted as a self-install product, most corporates will not look to adopt it themselves. They will look to partners to actually have that specialised knowledge and consultancy to design and deploy the networks and to manage or co-manage it on the customer’s behalf.”

With managed SD-WAN the fastest growing part of the market, Wilson reflected: “We brought our solution to the market exactly off the back of those conversations that Martin and Simon describe. To try and make it as straightforward as you can to go from a conversation about comparing connectivity prices to a conversation about how it works in your organisation.”

The panel agreed that SD-WAN is still in its infancy, but Wilson points out that customer adoption is growing rapidly especially with the shift towards working from home. “I know from a technical point of view there’s still a lot of people who are strongly behind private MPLS type connectivity,” he stated. “But customers are actively looking and researching this technology – SD-WAN is a threat if it’s not an opportunity. If you can’t have an informed conversation with customers you’ll start to miss out.”