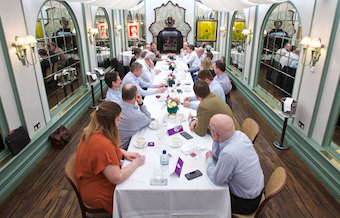 Round Table discussion: Those witnessing the slow pace of the UK’s connectivity upgrade could be forgiven for assuming that it is really an effort to save our legacy from its inevitable demise in 2025.

Attempts are now being made to make amends but with no clear national upgrade strategy there were plenty of issues to thrash out during last month’s 9 Group sponsored round table debate, which sent a stark message to the channel – don’t dilly dally, it’s time to take action.

Censuring the state of the UK’s comms infrastructure has become an industry pastime and source of frustration. It is undermining our reputation as a burgeoning digital nation, flouting the requirements of British businesses, and some say rendering us a laughing stock. According to the round table delegates, ISDN has long been out of date and the process to wind it down out of control and lurching. “Everything is driven by connectivity but the UK is massively behind the curve compared to other countries,” said Paddy Coppinger, founder and Director, White Horse Telecom. “Let’s not kid ourselves – we can talk about ISDN replacements, SIP trunks, hosted, on-premise etc – but it’s all driven by connectivity and we’re not even close. We haven’t even got FTTC sorted out.”

High-speed and capacious fibre connectivity is the primary alternative to the creaking national comms infrastructure lambasted by Coppinger, but upgrading the UK’s connectivity infrastructure should not be the unstructured land grab that has emerged. Clear information is needed about which areas are planned for development to avoid service providers being drawn ever more into a speculative play, and everyone must know where they stand, emphasised 9 Group’s Sales Director Anna Roper. “From a carrier service provider perspective, what the likes of Openreach are doing is unclear,” she said. “There are many unanswered questions and we’ve got to have guidance on the interconnect environment. We provide our own infrastructure and our vision is heavily dependent on us knowing the UK connectivity roadmap.”

ISDN today fails every long term viability test, as does the current piecemeal approach to implementing its replacement. This fiasco does nothing to lift the spirits of those crying out for connectivity that comes as standard in other nations. “Nordic countries laugh at us,” said Andrew Doe, Managing Director and founder, doetaylor. “A Danish group purchasing leased lines from us was astonished by the cost. They run 100 stores for the price of five in the UK. They view connectivity as a utility. And I was in France recently where restaurants have 400 MB synchronous fibre connections for under 100 euros per month.”

We have six years notice, but we’ve got to move now

Served with a death warrant ISDN will hit the wall in 2025, but Coppinger forecasts a potential surprise far sooner than the cliff edge date. “We’ve been given six years notice,” he said. “Do you think BT is going to wait six years? No, we’ve got to move now. There’s no minimum time given to us legislatively. There is however a false sense of security, and the reseller community could be squeezed by the timeframe being brought forward significantly, perhaps in the next 18 months to two years. And they will be ramping up their sales activity. We can’t sit here and be too comfortable.”

Better to educate end users now than leave them to the mercy of aggressive rival telcos, or risk a backlash from bolshie customers who may feel they are being pushed into a corner if not approached soon enough. “Deutsche Telecom switched off ISDN on December 31st last year,” stated Derek Owen, founder and CEO, Totem Consulting Group. “Two big issues emerged. A large number of businesses displayed animosity at being told they must change without fully understanding why. But it worked well when resellers offered customers early education, and set out the options to move gradually. If communication is poor and left to the last minute clients will be forced to do something when they don’t see the benefit. So get your options right and communicate now.”

The litmus test of any business leader is their alacrity to rise to a challenge and take positive action, which was a defining theme of the round table discussion as positive actions were brought to the fore. “We are formulating a strategy to educate resellers on what this journey will look like because it is extremely complicated,” said Ben Knights, Head of Product Commercial, 9 Group. “There isn’t one answer. We’re suddenly going to have different products in different areas and there will be more competition from altnets etc. Connectivity will also become a fragmented market, so it’s about working out what’s right for your business in your area. You need to make sure you’ve got the journey mapped out because what happens today has relevance for the next 10 years.”

In an ideal world the UK’s infrastructure upgrade would move away from one of a fragmented localised affair to being a coherent cross-industry effort as we embark on a transitional period that leaves legacy behind. Yet, to an extent companies are regional players in the FTTP lottery. “It’s about whether or not you can get FTTP,” commented John Corney, Managing Director, Portal Comms. “In our area there’s a lot of FTTP coming through. It’s an evolution and as part of this we have built a data network ourselves.”

That connectivity should underpin Britain as a cradle of digitalisation is not disputed, what is in doubt is the safety of legacy client bases, noted Lawrence McCaughey, Director, Russell Telecom. “We sell CPE and everything has a flavour of SIP,” he stated. “But we have a legacy customer base with thousands of customers who are technically PSTN and ISDN. With new providers selling hosted, how we get around our customers before anyone else is a challenge. We need to do something now.”

Just as pressing is a victory of common sense in bringing a collaborative approach to creating Digital Britain, but the modalities of a workable arrangement are yet to be envisaged, so the nation has been left virtually to get on with it, which from a competition perspective has opened up this market as a free for all that threatens ‘the establishment’. “Openreach will be overtaken by other players before it rolls out FTTP,” commented Adam Sankey, Sales Consultant, Opus Tech. “5G and the likes of CityFibre will have solved the issue for sites that haven’t got FTTP before Openreach puts the fibre in the ground, because it is dragging its heels to sweat existing assets.”

Hardly the makings of a connectivity ‘revolution’, according to Doe. “We should be ashamed of the connectivity we have in place, and FTTP should be an expectation and a right,” he added. “Small businesses recognise they now operate in a global market and that the UK is behind. I love it when someone’s got an ISDN 30 or ISDN 2 or something traditional because it’s not necessarily price driving change, it’s flexibility and you have to embrace that.”

For Equity Networks co-owner and Director Marcos Reid connectivity is ‘just the plumbing, a commodity’. “The rest is gravy,” he said. “That’s a simplistic view but it works for us. We offer a wide range of services for a small company, and are going north at a rate of knots as a result. The IT side is proliferating. We offer hosted VoIP, call recording, Azure, AWS, Office 365 and the managed service etc. The whole piece is where we’re heading. Connectivity is the bottom end.”

Reid’s assessment shows a confidence in connectivity that is ‘out of sight and out of mind’ because it does what it is supposed to do. A point picked up and advanced by Coppinger. “None of this works without good connectivity, and 5G will bring huge bandwidth to mobiles which will be the way forward,” he said. “Everything will shift further into the cloud. There will be small margins with 5G but massive numbers. We have already got the ball rolling on things that are mind bending in the IoT world.”

Coppinger’s upbeat assessment of 5G shows how easily business growth can be lifted beyond a normal sense of proportion, elevated by new possibilities in the IoT, although 5G does clearly pose a challenge to the industry. “Coverage is key,” stated Doe. “5G penetrates buildings less because it is high bandwidth. So it might cause an issue in the roll out of IoT as 3G and 4G penetrate buildings better. The packets of data are tiny, it’s about coverage not bandwidth.”

The big problem will be saturated 5G networks, according to Sankey. “5G should be reserved exclusively for IoT, devices and business, for people that need available bandwidth with low latency because that is what will affect real-time products,” he added. “Use cases for 5G and IoT are enormous, and the IoT will enable businesses to thrive.”

In contemplating legacy technologies that have had their day, the discussion concluded with an awareness and celebration of what’s possible in the future – a collage of opportunities. “We have a target rich environment, access to products to deliver on a best fit, best case basis, we are not regulated out of the market and we have access to everything on a level playing field,” stated Coppinger. “We all need to take stock of the wonderful time we are living in.”

Bites from the table

KCOM has invested heavily in fibre, and 85 per cent of Hull has FTTP. You have to do something sales wise by 2025 so why not do it now.
Ben Chetham, Managing Director, Open VoIP

IT professionals are not as geared up in the sales arena as we are. But the opportunity they face is ten times the volume.
Alex Hall, co-owner, Equity Networks

If you go back to the old days of WLR and LLU, BT came in at the last minute and kept the margins.
Claire Maddox, Commercial Director, Eurolink

How many SMEs know what ISDN is? Are they aware of what is happening?
Matthew Daly, owner, Dalycom

Unless customers see comms as an application, such as a call centre, it’s a utility like gas and electricity.
Lawrence McCaughey, Director, Russell Telecom