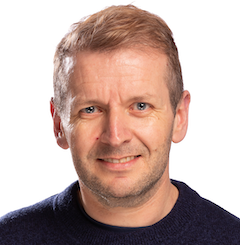 The statistics and trends imply ultimate finality to Ethernet business as they do traditional fixed and mobile voice. At this point – today – all roads lead to FTTP, argues Zen CTO Justin Fielder.

Dynamic industries are open to change, perhaps none more so than the tech-driven comms sector which must always act in the interest of customers wherever they sit in the value chain. Therein lies the CTO’s challenge, noted Fielder in his address to delegates at Zen’s Partner Conference staged at Manchester’s Comedy Store on November 28th. His job is to assess market and technology trends, and strategise based on the facts.

Banking long-term on value creation from Ethernet may not deliver on expectations, believes Fielder. And in a period of ‘revolution’ in the sector, other things are more important to end users, he stated. The future will be all about ultrafast, and channel partners would do well to recognise that trend sooner rather than later. “Ethernet feels like it’s on the rise with massive demand in the market now,” said Fielder. “Not surprising when you can get 10 Gig services at a crazy price. But are we going to see the same pattern that’s happening in voice? Sales are definitely on a downward trend, crossing zero at approximately 2025.

“Yes you can get 100 Meg or a Gig using Ethernet, and yes there is an intellectual discussion to be had about service levels and quality, but in layman’s terms, is there really a difference between Ethernet and FTTP? If the connectivity doesn’t go wrong in the first place you don’t need a SLA; and if it does go wrong but gets fixed reasonably well, and you have another way of communicating in the interim, does it really matter if you’ve got a four or five hour SLA, with no guarantee?”

It is a fact that most Ethernet circuits are bought with a back-up, and it’s just a matter of time before 10 Gig becomes the same price as one Gig. “The price of EAD will continue as between £1,500 to £2,000 for the foreseeable future, for a Gig, when you can get a Gig-ish full fibre connection for £60,” added Fielder. “In layman’s terms there is no difference, and fibre rarely goes wrong, it’s not like copper. These layman mindsets about such product lines will affect your business.”

In an attempt to provide an understanding of the evolving market, Fielder showed that Ethernet will in all probability have an ever less bearing on future revenues. On the other side, the rise of FTTP is already vividly seen in Zen’s order book, which is a sign of what is to come in ever more spadefuls over time. “Our user base is currently 97 per cent FTTC, three per cent FTTP, but our order intake is 81 per cent FTTC and 19 per cent FTTP,” explained Fielder.

“There are fundamental changes happening among end users. They are the ones that instigate the value chain we sit in. There is a revolution starting to happen and ultrafast is the game changer.”

Therefore the channel would do well to think now about jettisoning traditional models if they are to appeal to a different breed of customer with a new persuasion. But to clearly see the writing on the wall old habits in strategic planning must be overturned. “Our industry can be too forward looking, focused on questions like, when is FTTP going to be available everywhere?” commented Fielder. “The industry can also navel gaze and be too immersed in ‘today’, not what will happen in five years time. We need to consider the next five years, and more particularly, the changing role of voice and Ethernet during that period.”

Ofcom data shows how quickly businesses are stopping paying for channels of voice communication, as greater numbers prefer to communicate via other channels than a phone call. “And many partners now communicate with us in a different way,” added Fielder. “There is a distinct change and if this trend continues there will only be around two million business lines left by the time Openreach stops supplying them, and less than 500,000 by the time it turns them off, compared to the five to six million lines today.”

This is all part of an ongoing process of natural equilibrium from which comms industry players cannot escape. “When was the last time you made a call to Amazon? Never,” stated Fielder. “There is a different type of thought leadership within companies regarding how they communicate with customers. Amazon does the basics right, which stops you wanting to communicate with them. This is the direction of change, and all calls are trending towards the same 2022/2023 point – there is a big transformation happening.”

As you would expect, for Zen there will be no reversion to a familiar past, rather a leap into a FTTP future with a mindset of everything to play for. Zen’s game plan so far? A £20 million investment with 450 exchanges and a 350 Gigabit national network. “We will have 150 exchanges ready for ultrafast and follow fibre cities, which will lead to a series of upgrades on our systems and 700 exchanges that puts us towards 90 per cent coverage with a five terabyte core and national network,” said Fielder. “All will be ultrafast ready and with the systems that give channel partners the visibility to monetise the network.”