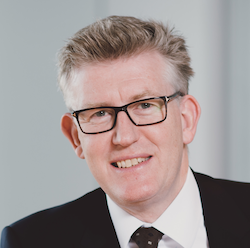 Ofcom has set out a four-point plan to 'supercharge' the roll out of fibre broadband across the UK, putting pressure on Openreach to encourage competition and adding support for investment in rural areas. The announcement was quickly followed by industry calls for Ofcom to prioritise competition, a level playing field and momentum.

CityFibre CEO Greg Mesch welcomed the proposals but urged Ofcom to inject urgency into its planning if the Government’s ambitious 2025 target for national coverage is to be met.

"The target is possible but only achievable with bold and affirmative action," said Mesch.

“The direction of travel Ofcom is taking to ensure national coverage and to help establish the at-scale competitors essential to maintaining a healthy infrastructure market for the long term is right, but we would like to see it move further and faster.

“While we are encouraged by Ofcom’s recognition of the risks of volume discounts and geographic pricing to damage competition before it can scale, but we would like it to be even more proactive in addressing these issues."

Ofcom says today's proposal sets out conditions designed to accelerate the roll out of full fibre and improve the business case for fibre investment while protecting customers from high prices. The industry watchdog has proposed what it calls a 'flexible regulation that will help fuel a full-fibre future for the whole of the UK'.

In a statement Ofcom said it intends to vary regulation for different parts of the country to 'ensure nobody gets left behind'.

The proposals form part of Ofcom's review of wholesale telecoms used for residential and business services. It also maps out how Ofcom will regulate BT for the period from April 2021 to March 2026, proposing to introduce a four-point plan to support competitive investment in fibre networks.

1. Improving the business case for fibre investment. In more urban areas, where there is likely to be a choice of networks, Ofcom will set Openreach’s wholesale prices in a way that encourages competition from new networks, as well as investment by Openreach – by giving it the opportunity to make a fair return.

2. Protecting customers and driving competition. Ofcom is seeking to ensure people can still access affordable broadband by capping Openreach’s wholesale charges on its slower copper broadband services. To prevent Openreach from harming competition, it would be restricted from being able to offer discounts that could stifle investment by its rivals.

3. In more sparsely-populated rural areas, where there is no prospect of multiple networks being built, Ofcom plans to support investment by Openreach. Ofcom would allow Openreach to recover investment costs across the wholesale prices of a wider range of services, reducing the risk of its investment.

4. Closing the copper network. Ofcom plans to remove regulation on Openreach’s copper products in areas where full fibre is built. This, says the regulator, will support Openreach in switching customers over to the new fibre network.

Jonathan Oxley (pictured), Ofcom Interim Chief Executive, said: “These plans will help fuel a full fibre future for the whole country. We’re removing the remaining roadblocks to investment and supporting competition, so companies can build the networks that will drive the UK into the digital fast lane.”

Ofcom is also hoping to support 5G by regulating Openreach’s leased lines which also form the data highways of the UK’s mobile and broadband networks.

Similar to its approach for broadband, Ofcom plans to vary its regulation depending on the level of current or potential competition in a given area.

This would involve Openreach having to provide companies with access to its dark fibre – cables that are ‘lit’ by competitors – in non-competitive areas, at a price that reflects its costs.

This, says Ofcom, would reduce the cost for mobile operators to roll out their new 5G networks.

The consultation closes on 1 April 2020 and Ofcom said it will publish its decisions in early 2021.

Tristia Harrison, Chief Executive of TalkTalk, said: “We fully support the goal of accelerating full fibre roll out in Britain. We are clear, however, that a competitive market is the only way to deliver this goal.

“It’s essential the regulatory environment allows competition and investment to thrive. Ofcom must avoid raising wholesale prices too early and only do so when competition has been established. This is the best way to encourage investment from new entrants, support retail competition and protect consumers from higher charges before they have access to faster, more reliable services.”

An Openreach spokesperson said: “Today’s proposals appear to be a big step in the right direction to give clarity and investment certainty.

“Like the Government and Ofcom, we want to upgrade the UK to faster, more reliable full fibre broadband. We’ll consider the range of proposals carefully and will continue to work with Ofcom and industry on getting the conditions right to help achieve the Government’s ambition of rolling out gigabit capable broadband across the UK as soon as possible.”

"Ofcom must take account of the work that providers such as Truespeed and others are doing in rural areas and not muddy the playing field by allowing Openreach to waste money on overbuilding projects in these areas.”

“We urge Ofcom to ensure a fair and level playing field between private and part public funded infrastructure providers as the industry ramps up to deliver on the promise of full fibre broadband for all, regardless of post code.”