Pragma: From distributor to service provider 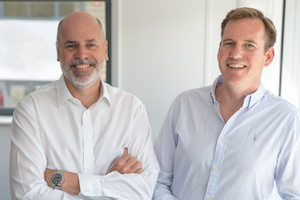 As one of the most successful comms start-ups Pragma continues to gain ever more influence as an evolving service provider.

Pragma was launched in 2012 by the late David George, Managing Director Tim Brooks and Sales and Marketing Director Will Morey, all colleagues with ‘previous’ in comms distribution having worked together at Crane which was acquired by Westcon. “Many in the industry thought we were crazy to establish Pragma given the size and scale of our competition,” noted Brooks.

West Sussex-based Pragma’s primary vendor is Ericsson-LG and its proposition is based on a single family of products called iPECS, providing telephony and UC functionality to customers from two to 5,000 users. “iPECS can be cost-effectively deployed as an on-site, cloud or hybrid solution,” stated Morey. “Therefore resellers don’t have to carry multiple products to address each option, and they can offer their customer true choice and the ability to evolve their communication solution from on-premise to cloud as and when they choose, avoiding costly forklift upgrades.

“We recognised from the outset that cloud was key to our future success and started working with Ericsson-LG in 2013 to develop a cloud UC platform based on its iPECS UC solution set. Our cloud service was launched in February 2016 and has been a huge success, making Pragma the cloud ‘poster child’ for Ericsson-LG globally.”

Pragma’s main focus is the traditional voice reseller channel where it has experienced significant success helping resellers develop a cloud strategy. “Many voice resellers we meet don’t like selling cloud as most SIP-based offerings are less featured and inflexible compared to the systems they are used to selling,” added Brooks. “But iPECS Cloud is based on a true IP PBX platform and has all the features you expect of a system, yet with the advantages of a SaaS platform.”

We see ourselves as more of a service provider, albeit with a distribution capability

Last month Pragma, which now has a 35 headcount, capped its sixth year of trading with annual revenues exceeding £8 million, representing 18 per cent growth on the previous year’s sales. The company has achieved between 15 per cent and 25 per cent growth every year since its launch, and barring the first 12 months it has delivered a profit every year.

“We are committed to generating similar organic growth with a focus on increasing our annuity revenue through increased adoption of cloud services and associated applications,” stated Morey. “We moved to our new purpose built headquarters in January this year, giving us three times more office and warehouse space than the previous location, enabling us to continue the growth curve we’re on.”

One notable feature of Pragma’s growth pattern is that the number of trading resellers, approximately 120, has remained largely unchanged as the distributor increased annual revenues from £2 million to £8 million. “We do this by applying our energy and resources to the smallest number of resellers possible who have both the desire and capacity to grow,” explained Brooks. “We also review the lower half of our reseller list regularly and close accounts if we have not achieved meaningful engagement with them, meaning we no longer need to support them, and they no longer have access to the iPECS range. This allows us to selectively add new resellers without flooding the market, therefore our products are not over distributed and resellers can retain strong margins.”

Business model
The factors that are shaping the evolution of Pragma include a shift to a more service provider type business model and implementing the technology, systems and processes required to support this, such as billing, provisioning and portals. Another key aspect of Pragma’s proposition, noted Morey, is the deployment of field-based sales and support staff in reseller offices, providing sales, technical and marketing assistance face-to-face. “Many competitors rely on websites and call centres to engage resellers,” he added.

Pragma is also leading the use of multiple channels to communicate with current and potential new resellers, including social media channels. Meanwhile, new technology areas firmly on Pragma’s radar screen include native mobile integration with cloud, providing a unified communications platform for both fixed and mobile users; and desktop integration as comms platforms have to be integrated with customers’ CRM, ERP and workflow applications in a digital transformation programme. Video and collaboration tools also need to be integrated.

In planning for future growth Pragma has identified its immediate and longer-term priorities, including the formation of a management team to help take the business forward, further staff recruitment, and advancing its own digital transformation project to unify the numerous systems it acquired over the last six years into a cohesive and connected strategy.

Furthermore, maintaining close and collaborative relationships with vendors enables Pragma to influence their product strategies and roadmaps thereby ensuring its portfolio is relevant to resellers. “We see ourselves as more of a service provider, albeit with a distribution capability,” stated Brooks. “Technology threats from mobile and collaboration providers means we need to build out our cloud UC platform to provide native mobile capability, collaboration tools, desktop integration and contact centre capabilities to remain relevant.”

The big market trends of most interest to Pragma right now include the transition to cloud, noted Morey. And he cited the growing use of mobile phones within the office which can prompt people to question the value or requirement for a desk phone. “Also, new collaboration tools such as Teams and Slack are being positioned as potential replacements for traditional communications platforms,” he added.

Yet Pragma has witnessed its on-premise business continue to grow following the launch and strong take up of a cloud service. “We expected to see a modest decline in revenue and unit sales of our on-premise products as more of our resellers either offer customers the choice of how their UC service is delivered, or in some cases resellers now leading with cloud,” commented Brooks. “However, due to a number of competitors in the on-premise space pulling back from or reducing their support for UK partners we have seen a wave of resellers move to iPECS due to the proposition and ongoing investment from Ericsson-LG in both cloud and on-premise based solutions.”

The iPECS platform has been recognised at the CNA Awards for the last four years in a row, and Pragma received the Convergence Distributor of Year award in 2016. Ericsson-LG hailed Pragma as its Global Partner of the Year in 2014, 2016 and again in 2017. For good reason. “Over the last six years we’ve created a reseller channel that is a force to be reckoned with, embracing change, launching new products and adapting to an ever evolving world,” explained Morey. “At the same time we’ve built many strong and lasting relationships as well as a real community feel across our channel.”

Some of the most successful resellers in Pragma’s channel have acquired IT support skills, allowing them to offer a more comprehensive ICT solution and support package, while at the same time removing the threat in these accounts from IT companies looking to win the comms business. “Resellers should position themselves as a digital transformation expert to ensure the customer views them as a strategic partner rather than a supplier that can be managed through a procurement process,” commented Brooks.

“We firmly believe that resellers will continue to be the dominant route to market for SMEs. Small business owners want to deal with people who they know and trust. We also think offering choice is key. For example, not forcing a customer to buy cloud or on-prem because that’s the technology the reseller is most comfortable with. Resellers with suppliers that can offer a solution that addresses a broad range of deployment options within a single product set will have the best chance of winning, while at the same time keeping the costs of managing their portfolio and suppliers as low as possible.”

This win-win scenario is reflected in Pragma’s overall optimistic assessment of the market and its growing role in the partner channel. “The industry and our channel is strong, vibrant and dynamic, so there are always new opportunities and potential for growth,” enthused Morey. “We’ve enjoyed working in the channel for many years and plan to continue for many more.”