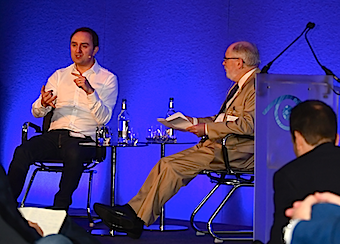 Digitalisation, while being a boon to the channel, has brought real challenges in its train, including disintermediation and a bad attack of end user technodazzle, believes Tom Cheesewright, an applied futurist, TV and radio tech presenter.

He works with large comms companies and consumers of technology to address three basic questions: What does our future look like, how do we tell that story and what do we do about it?

In his Comms Vision keynote and interview Cheesewright said it is sometimes important to look at the past when considering the future. "Mankind's ancestors worked out how they could amplify their own capabilities with tools and do more if they worked beyond the limitations of their own biology," he stated.

Why is this important for Digital Britain and the future of our industry? "We use technology to make our lives easier," added Cheesewright. "Technology is life's lubricant. It takes friction out of our day-to-day lives, releasing us to do other things. It doesn't stop there: We also take friction out of the use of technology, making it easier to access and deploy."

In this context the channel is reaching a critical moment, in effect undermining its future prospects through attempts to find a way to the all-digital future. How is this the case? As technology gets easier to use and more reliable there are fewer points of friction and little intervention needed. For example, cars are now engineered to remove friction and make them easier to use.

"This a problem because every point of friction is an entry point to the customer, an opportunity to sell them a product or service," added Cheesewright. "But we are progressively engineering the friction out of the entire value chain.

"Customers want to go direct which is causing disintermediation. And deployment is simpler: The shift to the cloud and hosted technology makes life easier and the technology is getting more intuitive. All of these entry points into the customer are being engineered out as we move into an increasingly digital world."

But all is not as it seems as the march to Digital Britain proffers alternative and more extensive opportunities. That is good news for the channel, enthused Cheesewright.

Diving into customer problems beyond traditional comms is a starting point

"Is this really doom and gloom and a challenge to the channel?" he asked. "Actually, there's some interesting new opportunities emerging out of one of the biggest trends – the explosion in choice in media, technology and products. People in general don't know what to do with it and they no longer have straight choices. Customers need help to navigate this complexity."

According to Cheesewright the evidence and common sense suggests that a fall-back to short-term tried and tested approaches to market would be utter folly.

If we wish to trade friction-free with the business community we must do so on its terms. The issue is how, and that must lie in the removal of ever growing complexity around the 'explosion of choice', according to Cheesewright.

"Just as we see real disintermediation we're also starting to bring back the middlemen who are best placed to help end user businesses navigate the complexity of choice that they face," he added. "If you can put your arm around your customers' shoulders, be their trusted voice, and even though there may be no transaction to be done your capacity to advise is now increasingly valuable."

As we pave a way through to Digital Britain traditional business models are disintegrating around us. A mix of innovation and consultancy will no doubt hold greater appeal  and that will be the responsibility of channel partners.

Customers are entitled to expect that the partners they previously selected to lead their ICT agendas keep their best interests at heart no matter the digital-driven upheaval. This expectation is a clincher, because exposed to the reality of ever growing choice customers cannot become effective components of Digital Britain if hamstrung by complexity and problems they cannot themselves resolve.

MNOs are challenged. They know the IoT is huge but are a long way from fully understanding the B2B opportunity

"Customers have rising expectations and these expectations are incredibly portable," commented Cheesewright. "My expectations are set by Amazon. I expect my product to be delivered tomorrow and the user interface to be slick and easy. People also have high expectations of what their service can deliver. Just good enough isn't good enough now. The service must be totally seamless and this is an opportunity for the channel."

Customers were once constrained in their ICT procurement processes by formal dependencies on their comms and IT providers, but digitalisation and disintermediation has let them loose. This does not mean that order has broken down, but it does mean that an appropriate response is urgently needed.

"Diving into customer problems beyond traditional comms is a starting point," explained Cheesewright. "Then match that understanding to what potential solutions might look like and how to deliver them, perhaps with a delivery partner. It's early days but nevertheless there is a huge opportunity."

The old business model was monolithic, not agile, and companies are starting to structure for agility. Businesses are mobilising and morphing with the times, deconstructing and rebuilding as if made from lego bricks. Partnerships play a role in this by helping to remove friction.

Sooner or later, every channel player will have to stand up and be counted, be innovative and disruptive to yield the business benefits of a near-frictionless but more complex market. As we have seen, in Digital Britain the channel must turn its attention towards a more constructive purpose by being at the vanguard of applying business problems to technology and pain point resolution.

"Start by asking all stakeholders and staff in a business what frustrates them, what makes their day worse, and what stops them from being as productive as they could be," noted Cheesewright. "Where are the holes in their industry, what are the aspects that everyone in that industry believes to be outdated but nobody challenges? What are the domains you sell into today, and the possible domains you could sell into tomorrow?

"In this context the channel must get to the central point of what a solution might look like. You need to be constantly innovative while bringing new ideas to the fore. Get your brain back into learning mode and focus on practice."

Universal solutions are starting to scale and it may be harder to differentiate, noted Cheesewright, who offered the example of a chip from China that costs no more than 50p to illustrate his point that innovation is a key route to differentiation. The chip can connect anything to the Internet via Wi-Fi, and Cheesewright's nine year old son is already a dab hand and coding it.

"This chip is all you need to solve some customer problems," he stated. "The development skills and technology are out there, innovation is cheap and quick and there is a huge range of opportunities. In this the customer relationship is core. Most people acknowledge that they can't keep up with the rate of change. They are looking for advice and people to help guide them through."

On the whole, the application of seamless technology might ultimately fail to account for the human experience, in a market of human beings. The answer lies in human nature, the magic dust of experience, and that teaches us that digital is a means, not an end.

Likewise, the case for a strategic breach with legacy technologies and their accompanying business models is totally rational and beyond argument, noted Cheesewright, who believes that no other market opening will come close to the IoT opportunity in terms of scale.

"We'll be talking machine-to-machine over the next few years versus human-to-human," he stated. "There is huge but invisible pent up demand for IoT solutions, and customers will be looking for expert guidance which is simply not out there.

"Technology has opened up a whole new wave of innovation. Digital may have lowered friction and taken away some of the pain points you used to solve, but it has created enormous potential for innovation, an opportunity that I don't see being taken up right now."

There are some completely missed aspects of 5G, particularly its potential to connect the IoT, believes Cheesewright. In a hands-up poll of delegates, a fraction of the Comms Vision audience fully grasped the extent of this opportunity. The MNOs are, in the main, equally mystified, revealed Cheesewright.

"MNOs are challenged," he said. "They know the IoT is huge but are a long way from fully understanding the B2B opportunity."

An ability to grasp new market opportunities will win the race in Digital Britain, and one of the most exciting emergent technologies is mixed reality, believes Cheesewright.

"It's a novelty now but fast forward ten years and consider what will replace the mobile phone," he stated. "It will be mixed reality, possibly through glasses that combine new display, graphic and battery technology.

"Mixed reality will become the primary interface to the physical world including the workplace. The technology is not there yet but the direction of travel is clear to see."