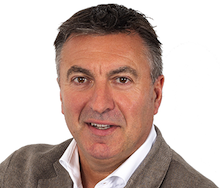 The move consolidates his leadership and caps a ten year spell at the centre of the distie's business transformation.

Grant, who joined the tech distribution division of Datatec in 2007 when it acquired Crane Telecommunications where he was CEO, is credited with playing an integral role in the remodelling of Westcon, for which he has held a number of senior exec roles - now the dual titles of President and COO.

Jens Montanana, Executive Chairman, Westcon International, stated: “This promotion is recognition of David's instrumental role in reshaping the business over the past two years.”