Commsworld Director delivers off the job 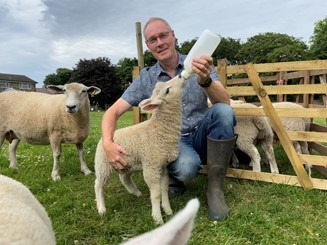 Commsworld’s newly appointed Business Development Director Dan Jackson has been delivering outside of his work remit, rolling up his sleeves to bring eight baby lambs into the world.

Working from home has allowed Jackson to combine his work at the Edinburgh-based reseller with life looking after animals at his country home near Richmond, North Yorkshire where he currently houses five sheep, eight lambs, 24 chickens and a two-year-old Rottweiler named Thea.

Jackson said: “We bought a house five years ago with some land and realised that we needed something to cut the grass so rather than yet another lawnmower we ended up with some sheep.”

His duties peaked this year as he delivered eight lambs, including three that must be hand-reared.

Jackson added: “I went out to the stables one morning and there was a fully formed lamb running around and another on its way.

“We did not even know they were due. Unfortunately, three were rejected by their mothers, so we have been hand feeding them, initially every four hours so it was full-on.

“However, when I can finish up a business call and look out at our field it really makes me happy to see the lambs running around. It is one extreme to the other, but I would not have it any other way.”