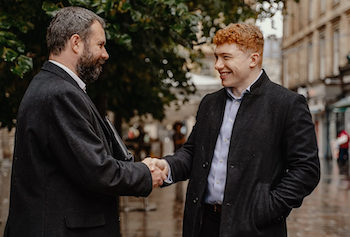 Livingston-based ICT company Incovo's technical capabilities and expansion plans have been boosted by a link-up with the IT services branch of Glasgow business Eta Delta.

The investment deal sees Eta Delta owner and Director James Myles become a Director and shareholder of Incovo which is headed up by 22-year-old CEO Chris Thomas.

"The deal significantly bolsters Incovo’s IT provision capabilities, newly expanded IT team and enhances our ability to offer high-end IT support, cyber security consultancy and remote working implementation," stated Thomas, who was a shoe shop assistant before taking the reins at Incovo in 2017, a year after the sudden death of his father Richard Thomas who founded the business.

"We’re approaching what would have been my father’s 50th birthday," added Thomas.

"To expand into the world of IT is a natural progression for Incovo and I know my father would have been as enthusiastic as I am about this new chapter. This feels like the perfect way to honour him."

Myles added: "Incovo and Eta Delta have worked together for over a year which made the deal a natural move with the added bonus of Incovo’s strengths in admin, sales, billing systems and client management."