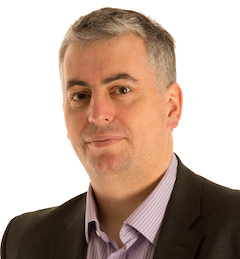 Commsworld is set to become one of the industry’s main players with a voice and influence to match, according to newly appointed CEO Steve Langmead.

Commsworld’s Non-Exec Steve Langmead took over the CEO role from Ricky Nicol in January. Nicol continues on the board as Founder and Vice-Chairman. His successor has been a Director of Commsworld since 2018, and former roles include Senior Vice President of Atos in Scotland and Capita’s Chief Executive for Scotland. “While Ricky likes football and Hibernian I’m more of a rugby and Boroughmuir man, but our goals are the same – to accelerate our expansion plan across the UK,” stated Langmead.

What transformed Commsworld into a national player was the acquisition of Fluency Communications in 2012. The move followed Nicol’s decision in 2009 to kick off the build of a UK-wide Next Generation Network. In 2016 City of Edinburgh Council became Commsworld’s first large public sector customer, and in 2018 it won a seven year contract with Glasgow City Council – turnover then exceeded £20 million. “That was a good year for Commsworld,” stated Langmead. “Our objective is to double in size by continuing to win new large business across the UK.”

Commsworld was founded in 1994 by Nicol as a reseller of telephone systems. Now the Edinburgh-headquartered company manages and controls what it claims to be one of the largest privately owned optical core networks in the UK. It employs more than 100 staff and breaking the £20 million barrier represented a 41 per cent revenue increase on the previous year along with a threefold increase in profits.

The most recent annual figures saw profits rise by 111 per cent, enough to secure a ranking in the Sunday Times Profit Fast Track as the 23rd fastest growing private business in the UK in 2020. Commsworld’s growth is mainly fuelled by its hand in four of Scotland’s largest public sector ICT contracts with local authorities. In addition to Glasgow, the company has secured big deals with Edinburgh, Renfrewshire and the Scottish Borders. “Ricky was at the helm as Chief Executive for more than two decades and did a tremendous job,” added Langmead. “I have big shoes to fill as CEO. My task is to provide continuity and stability, carry on the growth, make sure our services are ahead of the competition an expand the customer base throughout England and Wales in the public and private sectors.

While Ricky likes football and Hibernian, I’m more of a rugby and Boroughmuir man, but our goals are the same“Our network covers the length and breadth of the United Kingdom, including every local authority area no matter how rural. We link up to all Internet exchanges and have much to offer on a UK-wide scale. We’ve also been working in partnership with global IT and business consulting services firm CGI to deliver faster, more reliable network services in Edinburgh, Glasgow and the Scottish Borders. Good connectivity in the public sector is a target market and we envisage that this will continue to be a growth area.”

A challenge is getting Commsworld’s voice heard when up against the bigger operators, but winning big deals, such as the £5.8 million digital contract with Glasgow City Council, has ramped up the volume. Commsworld’s ambitions also became loud and clear when PE firm LDC completed an investment in the company in 2018. The deal provided an exit for the remaining Non-Executive Directors and private shareholders including Chairman Ian Blackford. The new-look board includes John Trower as Chairman, Charles Quinn as Chief Commercial Officer and Chief Operating Officer Bruce Strang.

“With the backing of LDC we have continued to establish Commsworld as an alternative to the larger service providers, a point underscored by a £15 million contract win with Renfrewshire Council to upgrade its digital connectivity and services across the region,” said Langmead. “This deal is set to last for 17 years and in partnership with CityFibre we have been rolling out full fibre connectivity to approximately 180 council buildings including schools, local libraries and community centres, as well as the region’s CCTV and traffic control systems.”

According to Langmead, it’s time for the industry to get its act together, unite and remove the digital divide that the Covid-19 has exposed, creating a world where connectivity is inclusive and digital poverty is eradicated. “Access to digital connectivity is fast becoming a key human right,” he emphasised. “Commsworld stands ready to help the Scottish and UK Governments achieve this goal. The key to bridging the digital divide is to provide something that hasn’t been done anywhere else. We have the connectivity and capability to connect a city’s entire social housing stock to our fibre network. This would help bridge the digital divide so school age children in our major cities’ poorest areas would have equal access to the Internet.

“Furthermore, if schools provide students with laptops or devices, Commsworld would allow these to connect directly to the school network – in the same way as the council network. Good connectivity would provide homes with Wi-Fi and wired Ethernet ports to support device connections including IoT and sensors.

“Such a network would support equality and inclusion in education while also helping to raise attainment. Cities could fund this from capital funds available for social housing improvements. Lives could be transformed and the knock-on benefits could be huge.”

Just a minute with Steve Langmead...

Role model:
I admire anyone from the older generation. We can learn so much from their wisdom and experience.

What’s the biggest risk you have taken?
Starting up my first business. I hadn’t done that before and I knew it was going to be a learning curve.

If you weren’t in IT what would you be doing?
As a schoolboy I loved architecture and archaeology. Still do, so I’d probably have chosen a career in either one.

Tell us something about yourself we don’t know:
I am dyslexic and always struggled to spell. It’s been a challenge, but I’ve also used it as a positive. It helps me look at the world in a different way.

Biggest achievement:
I have always enjoyed helping talented young business people develop and move on to grow their own businesses. I still get the most pleasure out of doing so today. It’s vital that those at the top help continue to nurture the best talent of tomorrow.

Lessons learnt:
I make a point of running towards things which other people say cannot be done. I wish that I had this philosophy earlier in life.

Name three ideal dinner guests:
I’m a vegetarian, so my ideal guests would be any three people who love good veggie food and have good chat.

Give one example of something you have overcome:
Dyslexia. I learned to turn what might be seen as a weakness into a strength.

What do you fear most?
Nothing really: I like embracing all challenges, the bigger the better.

How do you relax?
Enjoying family and rugby time. My sons play and my wife likes rugby too.