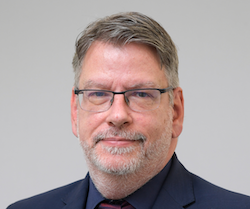 CityFibre’s Director of Regulatory Affairs Alex Blowers has spent the last 30 years working on telecoms policy and regulation and in January this year he was appointed Chair of the Independent Networks Cooperative Association (INCA).

With his INCA hat firmly on his head, Blowers explains how the industry body plans to influence policy with Government and Ofcom in the context of the Government’s ambitious targets for national coverage of gigabit-capable networks.

CityFibre’s Director of Regulatory Affairs Alex Blowers has spent the last 30 years working on telecoms policy and regulation and in January this year he was appointed Chair of the Independent Networks Cooperative Association (INCA). With his INCA hat firmly on his head, Blowers explains how the industry body plans to influence policy with Government and Ofcom in the context of the Government’s ambitious targets for national coverage of gigabit-capable networks.

The common thread throughout my career is basically the title of the Duopoly Review White Paper of 1991 – ‘Competition & Choice’. Telecoms is a hugely important sector, not just in its own right but for the health and wellbeing of the wider economy and society. A service-based economy needs world class digital infrastructure. And as individual consumers and citizens, more than ever we need reliable, unconstrained connectivity to fully participate in the economy and society.

I’ve always been clear that the best way to secure that outcome is through a competitive market. Both economy theory and bitter experience tells us that relying on the incumbent to do all the heavy lifting is a guarantee that we, as a society, will be slow to invest and innovate. Specifically, as we all now recognise, we are playing catch-up on the deployment of full fibre technology. Having started earlier than everyone else on the path to liberalisation back in the 90s, our poor performance in rolling out full fibre can only be described as a policy and a market failure.

Having started earlier than everyone else on the path to liberalisation in the ‘90s, our poor performance in rolling out full fibre can only be described as a policy and a market failure

Right now, alternative fibre builders are the tip of the spear when it comes to driving investment and competition. It is the alternative full fibre builders who have challenged the complacency of the incumbents and forced them to respond with their own network investment plans. INCA’s membership has stepped up and raised enormous amounts of money in a short space of time to make what are genuinely transformative investments. I want to be as closely involved as I can be as this plays out, hence my delight to be offered the chance to Chair INCA.

INCA was founded in 2009 to bring together operators, suppliers, community organisations, local authorities and others who were keen to see the development of new broadband services based on full fibre and wireless services. In other words, networks not dependent on the existing copper phone network. It was created by a small team associated with the Community Broadband Network led by Malcolm Corbett. INCA now has more than 160 organisations in membership from across the value chain.

The fundamental story is that the UK is now playing catch-up. The Government’s targets are hugely ambitious, but it is right to set a stretch-target to get as much of the country fibred up as fast as is humanly possible. But the public debate continues to be dominated by a ‘will they, won’t they’ dialogue around Openreach’s plans. Ofcom’s current market review rightly recognises that investors need some degree of certainty about the regulatory treatment of their investments. Obviously we need BT to play a role, but the most important thing for Ofcom to get right is a regulatory level playing field that allows the altnets – who are ready, willing and able to commit their capital without any special favours from Ofcom or the Government – to get on with their ambitious plans. If we can make the market genuinely competitive, achieving the Government’s targets will be a heck of a lot easier than if we are solely reliant on BT.

Altnets are currently being under valued and their importance to the overall policy objectives of Government and Ofcom not given as much weight and priority as they should. Having spent time in both the Government and Ofcom, I want to see if we can find a way to address this. It is basically about proselytising the scale of the inbound investments and why only a competitive market will deliver what the Government wants to achieve. It helps that this is all the stuff that I passionately believe in!

Encouraging closer collaboration between the altnets themselves is key. Generally speaking, the altnets are not competing directly with each other, so we are able to collaborate pretty freely. I think for example that there is scope to work much more closely on common approaches to wholesaling our networks to ISPs. And we can all learn from each other as we address the range of gnarly problems created by what is collectively a massive national civil engineering programme.

Also key is securing a supportive framework from Government. There are two big things here: Making sure that the Government spends the money it has set aside to fund rural full fibre deployments in a way that gets maximum ‘bang for its buck’. No surprises that my view is that this will be achieved by making the awards process as open to altnet participation as possible.

We also need to bust barriers. What will slow us down is unjustified impediments to building at speed. The Government is consulting on reform of the rules on obtaining access to buildings to connect them to full fibre – this for me is a huge issue. More generally, we need to work in partnership with Government and other key stakeholders to make the positive case for this huge infrastructure upgrade. There is still a large amount of confusion about what full fibre is, and why we need it.

INCA can exert a greater influence on Government and Ofcom by speaking with one voice wherever we can, and we need to emphasise the scale of the investments now on the table. I’m optimistic that the Government gets this. I still think we have some work to do with Ofcom.

The recent publication of Ofcom’s market review disappointed many INCA members. Particularly in its treatment of altnet competition in rural areas it highlighted concerns that Ofcom still seems to see the altnets’ role as being just enough of a threat to goad Openreach into responding with its own investment plans. That’s fundamentally wrong, in my opinion.

The goal should be to pave the way to a genuinely competitive market throughout the whole country, not just urban areas. Without that competition in all parts of the market including more challenging rural areas, there is a risk that deployment is delayed and the Government’s targets are undermined.

The key for a body like INCA is to remain relevant to the membership. We can provide a unified voice in policy and regulatory debates that presents a collective view as opposed to a myriad of ‘special interests’. INCA can also do a lot of the donkey work on topics that are not a top priority for smaller, growing organisations, but will become very important.

For instance, INCA’s work with the OTA and industry planners on GPL Switching. Another example is the development of industry standards for full fibre and fixed wireless networks. These activities need to be clearly member-led, supported by a dedicated executive team and pool of specialist contractors on a shared cost basis.

We aim to foster a common understanding of the sector’s role and potential in meeting Government objectives in a way that makes a strength of the sector’s diversity, operators’ ability to respond effectively to local needs, plus of course the altnets’ impressive track record in attracting more than £8 billion of new investment in a very short space of time.

When we look beyond the immediate challenges – Ofcom’s market review, the Government rural programme, barrier busting – I see an important goal as being to drive take-up and adoption of the full fibre networks we are building. There is a lot of stakeholder and consumer confusion, and this is not helped by the Government adopting ‘gigabit capable networks’ language in its own target. Let’s be clear about this: For all practical purposes, the achievement of its target will be via the building out of full fibre networks, for the very good reason that full fibre networks are the gold standard for a modern digital communications platform.

It’s also a long-standing concern of mine that a lot of consumers already think they have the gold standard, because they have been told that part-fibre products are best in class. When someone gets a marketing message that an FTTC product is ‘the ultimate fibre broadband’ it’s understandable that they will be sceptical about claims that full fibre will be ‘beyond ultimate’. There is a huge effort required to increase awareness of the differences between full and part-fibre products and the superiority of the former. INCA has made a start on this with its kitemarking initiative, but for me this is something that Ofcom in particular needs to get to grips with.

One other issue that we need to be aware of, even if it some way in the future, is eventual industry consolidation. I don’t want to set any hares running, but it seems to me an obvious and probably a necessary development in the medium term. When the cable industry went through its consolidation phase in the late 1990s it suffered from the absence of collaboration beforehand which created huge practical problems with consolidation of different networks and systems. I think INCA can be a useful forum to collaborate, not just because this is a good thing in its own right, but because it may increase our collective value proposition if consolidation does take place.

INCA’s key priority for the next period is to support the independent operators – the altnets – as they scale up to meet the challenges of delivering gigabit capable, full fibre networks throughout the UK, playing a full role in the government’s ambitious agenda. That includes working hard to ensure Government policy and Ofcom regulation recognise the vital role of the sector.