Home » News » Comms Vision 2021: Stobart's stark assessment of climate change truth, and why we must all act now

Comms Vision 2021: Stobart's stark assessment of climate change truth, and why we must all act now 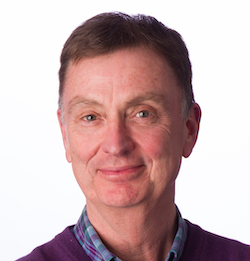 Current arguments about reducing carbon emissions miss the point – it's not about when and how, it's much more about moving ever faster and right now. On that there is no choice, according to Zen Internet CEO Paul Stobart.

In his VisionTalk, Stobart laid out many uncomfortable facts about climate change that should silence any arguments to the contrary. And he demonstrated through the clear evidence of science why we need to act superfast to build a sustainable future. "We are in deep deep trouble," he stated. "We are heading along a path to three degrees of global warming, and that's if everyone does what they say they are going to do at COP26 in Glasgow. Three degrees is the number you need to focus on, and it's not a good number."

With a moral conscience Stobart diligently conducted his own painstaking and lengthy research, all of which has been corroborated by technologists and climatologists. "Like many of us, during lockdown I started to think deeply about a lot of things, including climate change," added Stobart. "I thought about this in terms of 2100, which seems a long way off. Then it occurred to me that in the case of my children, their children will be around my age at that time. That's just two generations."

He demonstrated through the evidence of science why we need to act right now to build a sustainable future, and presented almost apocalyptic examples of climate related calamities . "South of the Channel Islands everywhere in the world will be extremely hot," he said. "In the Tropics it will be unbearable. There will be more people on the planet with less room to live."

In this world, Gleneagles, the venue for Comms Vision, will be extremely cold because of the Gulf Stream which moves vast quantities of warm water to the North Atlantic, giving us our temperate climate. It sinks as it cools and goes back to the Tropics to cool the water there. But the Gulf Steam is slowing down - 20 per cent in the last 40 years. And as it slows down the risk of climate change becomes intense. Most predictions are that it's near a critical transition point. That means that by 2100 it would have slowed down by 40 to 50 per cent which is why it will be colder. But inland, the south of the UK will be baking hot."

The reason the Gulf Stream is slowing down is twofold, noted Stobart: The general warming of the air, and the ice sheets that are melting. The Greenland ice sheet is melting very fast, and the Arctic is also in melt down mode. "You can imagine getting to the North Pole by ship very easily," added Stobart. "Furthermore, sea levels are rising. By 2100 it's estimated that sea levels would have risen by two metres, enough to see London under water from Canary Wharf to Dartford, Chelsea and Hammersmith will go, Fulham will be under water at high tide and Battersea would have disappeared. And the area from Peterborough to the wash would be one brackish salty marsh."

With the ongoing melting of ice, it's perfectly possible that in hundreds of years we could have sea levels more than 50 meters higher than today, pointed out Stobart. "The last time that happened was 50 million years ago when it was four degrees warmer, no ice anywhere and palm trees in the Arctic Circle," he added. "That's the era we are heading back to at pace. And we have done all that in 150 years with fossil fuels."

Also in 2100, people will be hungry as grain yields decline by 10 per cent for every degree of warming. It gets more pronounced as each degree takes place. "Half of the world's population relies on ice melt for their fresh water," said Stobart. "But the ice would have melted. I could keep going on about the oceans dying and the Amazon jungle forecast to disappear in 20 years. The Sahara would have doubled in size by 2100. It's not good. My grandchildren could be living in this environment."

"But at the moment we are generating 40 gigatonnes a year. The forests and the oceans can't cope. Yes we're planting two billion trees a year, which is great. The snag is that we are cutting down, burning, deforesting 10 million per year. So we face a major challenge in living within that critical 300 gigatonnes metric."

In seeking solutions Stobart argued that nuclear is as safe an energy source as you'll find. "We must invest in nuclear - it's green," he said. "Hydrogen is really useful for heat intense industries like steel, cement and glass, and for logistics and transportation where batteries just don't work. Renewables today are still only seven per cent of global energy source. We have so much to do and only 300 megatons left. Scientists say that amounts to about seven years. The only sustainable way to do our bit is reduce carbon emissions dramatically and by 50 per cent."

Zen has a net zero date of 2028, which Stobart says needs to be significantly brought forward. "By that time, six of the seven years would have gone," he added. "It's too late. The country as a whole is looking at 2050 – too late. India, 2070, who are they trying to kid? As business leaders we have a choice - we could all choose to reduce emissions by half from tomorrow. There will be costs and implications - but we could choose to do those things. If we don't, our grandchildren will not forgive us.

"It's important for all of us in our industry to reflect and see if we can choose to make a difference. To get it right, you've got to measure very accurately what you are emitting. And give your people a challenge to reduce their emissions - make them part of the issue. You'll be amazed at how many ideas come out of nowhere."

The winners of the next decade, says Stobart, will be those businesses that put climate change at the heart of their strategic ambitions and purpose. "There is no question that we have to change the way we do things and behave," he urged. "If we work together as an industry, collaborate, share best practice, work through our supply chains up and down stream and work out ways to reduce emissions, we might just have a chance of making 1.5 degrees and avoiding that horrific future. It can be done if we act together, and act now."