Home » News » Comms Vision 2019: Chen urges comms industry to 'get its act together'

Comms Vision 2019: Chen urges comms industry to 'get its act together' 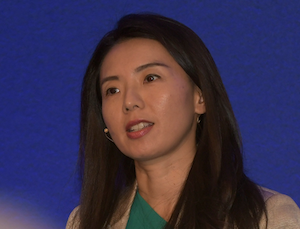 Calls to deliver digital transformation have long run through the industry like a Mexican Wave, yet when it comes to full fibre barely a ripple has been felt on the ground.

Enter CityFibre, a disrupter which is making waves, and when the enormity of what is at stake for the channel is fully realised it will show itself eager to champion the unfettered role out of full fibre, according to CityFibre Chief Customer Officer Elsa Chen.

In her Comms Vision TED Talk she emphasised that transformation is ultimately about choices, and the time for the UK to pull its infrastructure socks up is now.

Infrastructure is critical to the UK but we are currently languishing far behind other countries in rolling out full fibre. It says something when the world's fifth largest economy ranks 30th out of 35 nations in terms of comms infrastructure, noted Chen.

"Competition is key," she added. "We are in this position because of a lack of competition. Now, it's about making the right choice to build an infrastructure that underpins the digital economy."

It is a fact that the positive economic impact of a fully fibered Britain will run to many billions realised in short time. And Chen put the onus squarely on delegates and their counterparts across the UK as potential agents of change with the power to bring about these propitious conditions.

"Don't underestimate your power of influence," she said. "The channel can anchor a continuation of the monopoly or seek an alternative. It's time of the industry to get its act together."

In exercising its own power of choice to spark a transformation CityFibre has committed to not less than 20% full fibre coverage.

"We must understand that the decisions we take now have an impact on what the digital infrastructure will look like in ten years time," added Chen. "The choices must be made today."