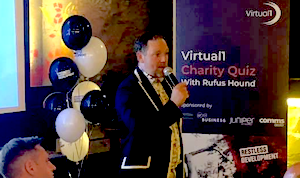 Virtual1 CEO Tom O’Hagan stated: “The work we do with Restless means a great deal to us. Hosting the charity quiz is a highlight for the business. It’s a great night dedicated to raising as much money as we can for this special organisation."

All funds will go towards empowering young people across the world who might otherwise be caught in a spiral of unemployment, poverty, lack of education and poor access to health services.

"Over that time they have supported thousands of young volunteers with training, tools and access to networks. Whether responding to earthquakes or building long term HIV prevention in schools, young people have proven to be an unstoppable force for long lasting, positive change.”