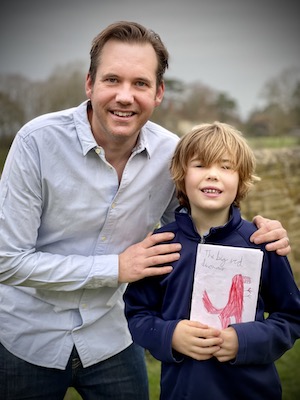 Pragma Group director Will Morey has taken diversification to new levels during lockdown.

As well as heading up Candio, a new online services company to help resellers boost recurring revenues, he’s now entered the world of digital publishing in partnership with his eight-year-old son Jack, hoping to raise funds for hungry children in the UK.

Home schooling took on a new meaning for Will when young Jack decided to write a book called ‘The Big Red Dinosaur’ which he diligently illustrated and stapled together for his parents.

“We were very impressed and when he said he wanted to sell the book and raise funds for Marcus Rashford’s FareShare charity, we agreed that a digital version would be better than printing out copies and selling at the end of our drive," said Will.

“We downloaded an app for the iPad, started working on creating a digital version and The Big Red Dinosaur has come to life. Jack sent a copy to his grandparents and they said they would give some money to FareShare and we set up the JustGiving page.  He then sent it to some friends, and It snowballed from there.”

To date, Jack has raised over £750 for FareShare and has set a target of £1,000. Will hopes the comms industry will help him get over the line. To donate got to https://www.justgiving.com/fundraising/thebigreddinosaur