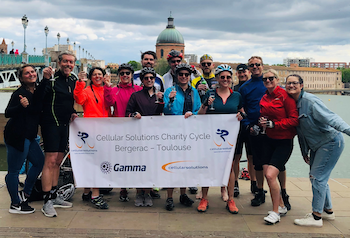 A charity cycle ride to the south of France undertaken by a team of 12 from Sussex-based Cellular Solutions has raised £34k.

This fifth leg of a plan (which was hatched in 2011) to cycle from Hove to Argelés sur Mer takes the total raised so far to £215k.

The riders ultimately hope to raise £250k by the time they reach the Mediterranean.

This year’s ride started in Bergerac and ended in Toulouse, covering 302km in three days.

"The level of focus and resilience from everyone in the business was exceptional, from the team in France doing the ride or supporting the cyclists, to the team back in the were office also fund raising," said Cellular Solutions CEO Damian Mottram.

The money raised will be shared between a number of charities.