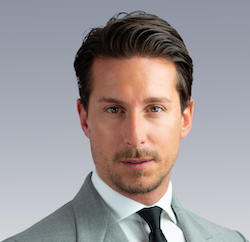 After former TV Apprentice Vincent Disneur found himself at the wrong end of Lord Alan Sugar’s pointed finger the Head of Sales and Marketing returned to Union Street’s HQ more determined than ever.

In 2011 The BBC’s Apprentice had its highest viewing figures to date and the channel’s very own Vincent Disneur was beamed into the homes of 8.8 million people. Lord Alan Sugar clearly thought the silver-tongued candidate wouldn’t need his £250k business investment, making him part of a sensational double firing. Lord Sugar was ultimately right, and eight years down the line Disneur has become one of the channel’s best-known faces. Alongside founder Tony Cook, Disneur has helped to build Union Street Technologies into one of the UK’s largest and most successful ICT billing specialists that now boasts 600-plus channel customers collectively billing over £1 billion annually.

Disneur says appearing on the Apprentice was a big risk but he has no regrets. “It was an experience which I value greatly,” he said. “It did well for my profile although I never took it too seriously, it’s a TV show after all. My 15 minutes of fame let me have a lot of fun for a couple of years post-show, but I never wanted to chase the fame game. Ultimately, it made me more determined than ever to succeed with Union Street.”

That’s not to say Disneur had any lack of ambition prior to his foray into reality TV, having had a passion for business since adolescence. “My parents taught me that if you work hard it’ll pay off and, as a youngster, I developed a mild obsession for making money and the nice things that came with it. So, I worked for it, doing everything from paper rounds to cleaning cars. In summer holidays I’d even cycle eight miles a day to pick tomatoes and once spent a three week holiday in Belgium labouring on building sites. Doing lots of tough little jobs makes you appreciate what it takes to become successful.

“I found my love of sales and IT during my A Levels when I worked part time at PC World, becoming the youngest person to enter Dixons’ Millionaires Club for annual sales. I had a bit of money compared to my mates at school and I was a very proud 17 year old when I used some of it to buy my first car - an old Golf MK2 GTI.”

As if that wasn’t enough, Disneur found time to claw his way up through the ranks of topflight tennis to hold one of the highest LTA rankings in the country. “All my free time was spent playing or practising tennis,” he explained. “I’d spend hours watching Sampras to see how he hit different shots, placed the ball, and studying the areas of the court he controlled. It made me realise that to succeed you need to push yourself, consume knowledge, and adopt a ‘give it a go what have you got to lose’ attitude.”

Fast forward to 2008 and Disneur truly put the ‘pedal to the metal’ when he was appointed Union Street’s Head of Sales. “It was a pivotal moment in the company’s development,” he recalled. “Union Street was in its infancy with just over ten staff and around 170 CPs using our aBILLity billing platform. The introduction of WLR3 meant that for the first time, CPs could truly compete with BT on a level playing field. Our game-changer was developing a WLR3 gateway for provisioning services from Openreach within our aBILLity billing software. Managing billing and provisioning from a single pane of glass offered huge advantages to CPs who were quick to see the benefits.

“In my first year I covered 55,000 miles travelling around the UK, meeting customers face-to-face. It was hard graft, but it paid off and the order book filled up. The rest is history, and while many other billing vendors have faded away or been bought out, Union Street has moved from strength to strength.”

In 2015 Disneur was promoted to Head of Sales and Marketing, taking a leading role in the redevelopment of the company’s marketing strategy and brand overhaul. “With the help of my team I completely overhauled Union Street’s image, making us one of the most distinctive brands in the channel,” he added. “My goal was to develop Union Street’s brand identity to better represent the sophistication of our solutions, our position in the market and the many changes in service delivery.

“What’s makes Union Street successful is its blend of high quality applications, account management, customer service and training. This ensures CPs leverage maximum value from our solutions and gain a competitive advantage. I developed the strapline ‘Powering Your Potential’ to encapsulate this message and to act as the foundation for Union Street’s market offering.”

The last year has been a seminal one for Union Street and Disneur believes the company stands in good stead for its next phase of growth. “Over the last year, £2 million has been invested into the research and development of Union Street’s software suite and this has led to several enhancements and new features, particularly to the web client for our software and its provisioning capabilities.

“We’ve significantly increased our customer base and enjoyed a series of high profile customer wins. aBILLity won the Best Billing Platform category of the CNAs for a record seventh time and won Vendor Channel Sales Team at the CDSMAs, too. Following a series of initiatives to enhance our service offering, we were also accepted as a member of the Institute of Customer Service (ICS). With the help and guidance of the ICS, we plan to make further improvements in this crucial area of operations in the coming months.”

Disneur also has his eye on future market developments which he believes will open up new opportunities for channel partners not seen since the liberalisation of the comms industry in the eighties. “Although I’m confident that plenty of life remains in traditional revenue models, there can be no denying that the comms landscape is in a state of flux,” he added. “Times are changing, and the industry is being transformed by evolutions in technology and customer behaviour.

“We have the arrival of 5G, Openreach’s planned transition from copper to a full fibre network, changing market trends including the rise in popularity of subscription models and managed service plans. The list goes on and on. Each of these alone represents a step change for the channel but, when combined, it’s safe to say that the next five years will be very interesting. Our goal is to empower CPs to fully capitalise on these and other emerging opportunities.

“Great change brings great opportunity and that’s one of the things I love most about the channel. We’re continually presented with disruptive new technologies that enable reinvention and offer new avenues for growth. Thanks to the changes in network infrastructure that will take place over the coming years, I believe CPs today have as big an opportunity as those that first formed the market following the privatisation of BT.”

Disneur is now enjoying the fruits of his labours and continues to relish his time in the channel community. So, what does he consider to be the highlight of his career to date? “The ICT industry and especially comms, is a unique business environment because of its vibrant community and an abundance of interesting characters and successful businesses,” he said. “I absolutely love being part of this channel and feel lucky to have made lifelong friends here.

“If I had to choose a highlight, the Comms National Awards 2011 would be it. aBILLity has since gone on to win many more awards, but that first time was electric and a fantastic endorsement of our product and the hard work we put into it. Many of our customers collected awards of their own that night too, and the only thing better than winning, is winning together.”

Just a minute with Vincent Disneur

If you weren’t in ICT what would you be doing?
Giving Federer a run for his money

Industry bugbear?
Those that lie about their capabilities or discredit others during the sales process

Who do you most admire in the channel?
Tony Cook and Matthew Riley. Tony is on his second successful business. He’s kept me grounded and we’ve had a good journey. I did a deal with Matt when he was billing about £9 million a year – he’s done alright since then