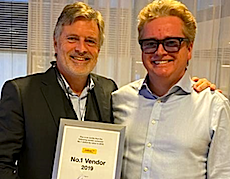 Jabra has secured top spot in a 2019 ranking of Nimans' supply partners.

The distributor's Sales Director Richard Carter handed over an award to Joel Hamon, President (EMEAR and CALA) at Jabra, to mark the vendor's ascendancy from third place to number one in just 12 months.

The award follows Nimans' designation as Jabra’s Distributor of the Year for the second year running.